Greece: No country for Afghans

Tens of thousands of Afghan refugees are once again stranded in Greece as EU nations have closed their borders and announced an agreement that would allow them to deport thousands – with Kabul's help.

Athens - Three years ago, the Taliban shot an officer of the Afghan intelligence agency in Kapisa, in northeastern Afghanistan.

The armed group often targets government workers, but this killing was different.

It led the officer's three remaining family members, his two sons and a daughter-in-law, on a journey across two continents.

Soon after his father's assassination, Ezmarai, 24, realised that his entire family had been added to a Taliban hit list. They came under direct attack at least two more times over the next two years.

First, Ezmarai's 15-year-old brother was shot at, but was unhurt. Then their car came under Taliban fire.

Late last spring, after gathering the nearly 5,000 euro for the trip, they decided to leave everything behind, including their home and the family's land, for a chance at safety in Europe.

By the time they were crammed into a boat on the Aegean coast last May, they had a new reason to seek asylum in the European Union: Nadia was pregnant with their first child.

As the inflatable boat —  teeming with fellow refugees from Afghanistan, Iraq and Syria — rocked in the darkness of the night, they prayed that in Europe, their baby would see a better life, free from war.

But life in Europe has not turned out as they had envisioned.

With European nations having closed their borders even before the couple arrived in Greece, they have found themselves stuck living in the military-run Schisto refugee camp, 15 kilometres from the Port of Piraeus.

Their son, Amir, has spent his first six months of life in a tent.

For basic supplies, the couple must make daily treks to central Athens.

There, they line up with hundreds of other men, women and children from Afghanistan, Syria and Iran, to collect milk, diapers, toothbrushes and second-hand clothing at the Salvation Army Day Centre, an NGO that provides aid and assistance to refugees in the Greek capital.

On a chilly Monday morning earlier this month, they once again boarded the bus to the centre. Only this time they didn't gather supplies. As the crowds mill about, asking for everything from baby bottles to size 42 sneakers, the couple waited patiently in a corner.

When the room finally quiets, Ezmarai and Nadia were approached by a representative of the International Organisation for Migration.

The representative asked them what they need.

Their response was simple: "We're here to be deported."

It's a request that startled the IOM representative.

"We can only assist your voluntary return if you can assure that you will be safe in Afghanistan," the representative told them several times.

The truth is, they wouldn't be safe, but they have resigned themselves to the reality.

They felt they had "no other choice," the family told TRT World afterwards. Thus began a long process.

Last spring, husband and wife, with Ezmarai's teenage brother at their side, set out on the route taken by more than 45,000 Afghan refugees so far this year, only to end up stranded in Greece.

Most refugees see Greece, which is still reeling from a seriesof austerity measures and a 24 per cent unemployment rate,as little more than a stopover point from which a smuggler can take them further into Europe.

The European Union, however, has a different vision. Over the last year-and-a-half, the 28-nation body has enacted a series of policies that has made certain Greece will be the final border for refugees.

In order to ensure this, the EU and international NGOs have provided Athens more than 700 million euroto contain the refugees within the confines of their country.

It's a policy the bloc sees as a deterrent to a repeat of the so-called "refugee crisis" of 2015, when more than a million refugees â mostly Syrians and Afghans â crossed into Europe.

It's been eight months since Ezmarai and Nadia have been in Athens and the conditions in the refugee settlements, funded largely by EU money, have already left them dejected.

In Afghanistan, the couple lived in fear of the armed opposition. In Athens, they fear for Amir's life because of the elements.

"They put some plastic around the tent, but it doesn't do anything to keep out the wind and the cold. A child shouldn't have to sleep in the cold," Ezmarai said.

The conditions in the refugee camps have caught the attention of Greek lawmakers.

A Communist party parliamentarian has criticised the Greek government for the "miserable" and "degrading" conditions.

Earlier this month, Greece's Alternate Minister for Migration, Yiannis Mouzalas, told the parliament that all of the tents in Schisto — the camp where Nadia and Ezmarai have been living — will be replaced with houses by December 15.

The refugees have long been complaining of a lack of proper medical aid. Seeing a doctor requires a 10 to 15 kilometre trek.

"We went to the hospital, it was no use," Ezmarai said.

"No one knew what we were saying."

With tens of thousands of Afghan refugees stranded in Greece, the settlements have become overcrowded. People hang blankets in tents for privacy. With winter approaching this practise means a trade-off between staying warm or maintaining privacy.

In addition, life in the tents means children will be left without schooling for months.

Up to 18,000 refugee children in Greece have been out of school this year.

"These children are losing out on so much valuable time, but it seems like the Greek government isn't even thinking about their education," said Ahmad Arash Hemati, who currently works at the Salvation Army Day Centre.

While faced with mounting difficulties, the refugees learned last month that the European Union and the Afghan government signed a deal that allows EU member states to deport an unlimited number of Afghan refugees whose asylum cases have been rejected.

The agreement is predicated on the grounds that there are areas of the country to which refugees could be safely deported.

Refugees in Athens insist that nowhere in Afghanistan is safe.

They have every reason to believe that to be the case.

In the last year, the Taliban has made plays for several strategic provinces in Afghanistan and groups claiming allegiance to Daesh have staged a number of deadly attacks. A recent report by the United Nations documented a 15 per cent increase in child casualties — 639 killed and 1,822 injured — over the same period last year.

Despite the dangers and uncertainties back home, several hundred Afghan refugees in Athens have decided to return home, but only to start another journey.

Nadia and Ezmarai are planning to land in Kabul and then move to Iran.

The plan to go to Iran, where rights groups have documented repeated harassment and abuse of Afghan refugees, highlights the limited options left for them.

"The Arabs are first. We have been pushed aside, forgotten. Europe is for the Arabs," Ahmad, 28, said, referring to the preferential treatment many Afghan refugees say Syrians receive in the EU.

Even Pakistan, where millions of Afghan refugees have lived for decades, is no longer an option.

The IOM and United Nations estimate that as many as 600,000 registered and unregistered Afghan refugees may leave Pakistan by the end of the year. The IOM says Afghans have left due to violence, arbitrary arrest, detention and other forms of harassment.

The expulsions from Pakistan stem back, in part, to the aftermath of a 2014 attack on a school in Pakistan. The mastermind behind the Army Public School massacre was reported to be in Afghanistan. This led to increased xenophobia and discrimination that has only gotten worse over the last two years.

With the continued war in Afghanistan, rising discrimination in Pakistan and closed borders in Europe, Ezmarai and Nadia said this time, they will stay in Iran.

They hope a common language and cultural similarities may help them earn a living and provide for their family, something EU policies made impossible for them to achieve in Greece.

"It's an open-air prison," said Nadia. 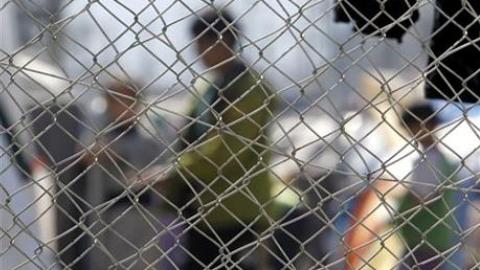