Experts point fingers at Haftar's ally Russia, saying Moscow might be facilitating the Iranian weapons supply into the war-torn country.

Iran, a country desperate for urgent funds to overcome its chronic budget deficits and severely hit by US sanctions, has come under the scrutiny of the UN for allegedly supplying heavy weapons to the Libyan warlord Khalifa Haftar.

Iran was banned from exporting weapons to other countries, according to a 2007 UN resolution, but the 2015 nuclear deal allowed that ban to be lifted in October. It’s not clear whether weapons were transferred to Libya before or after October, the UN report said.

“The Secretariat is unable to ascertain if this anti-tank guided missile had been transferred to Libya in a manner inconsistent with resolution 2231 (2015),” the report added.

But before the UN's claim, Israel was the first to name its main regional rival Iran for violating the UN's 2007 arms export ban. In May, Israel’s UN envoy Danny Danon also said Iran had sent anti-tank missiles to Libya.

Iran “categorically” rejects all claims regarding its supply of weapons to Haftar saying that it supports the UN-recognised legitimate Government of the General Accord (GNA).

Haftar's forces, backed by France, Russia, Egypt, the UAE and Saudi Arabia, fight against the GNA, which is based in the capital Tripoli. The GNA is supported by Turkey, Italy and Qatar.

In addition to the ban on Iranian arms exports, there is a UN arms embargo over Libya which was imposed in 2011. The international body, however, is yet to make a real impression on any state in terms of their compliance with the embargo.

“When Stephanie Williams described the Security Council imposed arms embargo as a joke, she wasn't kidding,” says Salah Bakkoush, a Libyan political analyst and a former advisor to the High Council of the Libyan state.

“It's a fact supported by regional and international interference and plenty of arms dealers that would sell anything to any party with money,” Bakkoush tells TRT World.

Despite Iran refusing the allegations it was involved in the supply of weapons to Libya, as well as siding with Haftar, ground realities suggest otherwise. Experts like Bakkoush find the cooperation between Haftar and Iran as a logical outcome for both sides’ essential needs.

“I'm not surprised knowing one party is desperate for funds and the other desperately seeking arms within a permissive environment,” Bakkoush said.

Imad Atoui, an Algerian political analyst on North Africa, who currently works for the Center for Islam and Global Affairs (GIGA) at Sabahattin Zaim University, points to another political motivation for the supply of Iranian weapons to Haftar: Russian involvement, he says.

“The supply of Iranian weapons to Haftar might have been facilitated by the Russians,” Atoui tells TRT World. Like Syria, Russia also wants to have a hold on Libya to deepen its involvement in the strategic Mediterranean territory in the fight for global superiority, he adds.

Despite the fact that mercenaries from the Russian Wagner Group have been spotted across Libya, Atoui thinks that Russians do not want to expose themselves too much to the international community in terms of their involvement in the Libyan civil war, using Iranians as a cover for their support of Haftar. Russia and Iran have been allied on multiple fronts from Syria to Iraq.

For Haftar, a disingenuous political opportunist who wants to take over Libya at all costs and by any means, Iranian weapons are more than welcomed, according to Atoui. The UAE and Saudi Arabia, Haftar’s two main backers, are the fierce enemies of Tehran in various locations across the Middle East.

“Despite being a warlord, Haftar does not reflect only one political side in the Libyan war. It means his personal interests and passion for ruling have made him an ally with any state or force, which feeds him militarily,” Atoui analyses.

“In this respect, Haftar is used by many forces, and states traded upon him,” he says, referring to Russia’s alleged partnership with Iran in Libya.

There are also old connections between Libya’s former dictator Muammer Gaddafi and Iran’s post-1979 revolutionary state. Gaddafi was one of the few Arab leaders to give support to Tehran during the decade-long war between Iran and Iraq in the 1980s.

“During the Iran-Iraq war, Libya came to Iran’s aid politically and militarily. Despite the ideological differences, Gaddafi played a crucial role in supporting [Ayatollah] Khomeini’s regime in Iran against Iraq. In fact, Qaddafi’s regime was one of three regimes in the world that decided to support Iran at the time alongside the Assad regime in Syria, and the North Korean regime,” wrote Ali Bakeer, a political analyst, in July.

Back in the day, Haftar was one of Gaddafi’s powerful generals, but he fell out of favour later on, leaving Libya in the 1990s for his exile in the US, where he became an American citizen, serving the CIA for more than two decades.

“It seems strange to hear that Iranian weapons are used in Libya. But, if we look at the historical ties between Iran and Qaddafi’s Libya, we conclude that the Libyan-Iranian ties have always been strategic,” Atoui says.

“We have seen that, for instance, in the strategic backup of Qaddafi to Iran against its war with Iraq, and Iran also asserted a military backup to Qaddafi before his killing,” the analyst adds.

But other experts like Bakkoush find the story of old connections “too old”.

“[It’s] possible but unlikely especially since those connections are too old and go back to the Iran-Iraq war. Let's not forget the case of Imam [Musa] al Sadr vanishing in Libya and it's negative impact on relations,” he points out.

In 1978, Musa al Sadr, a charismatic Lebanese Shia cleric, who was born in Iran, suddenly disappeared in Libya. His legacy is one of the reasons behind the rise of Hezbollah.

“It's most likely a result of geopolitical conditions (Iran-Syria-Russia vs US) enhanced by need for funds,” he concludes. 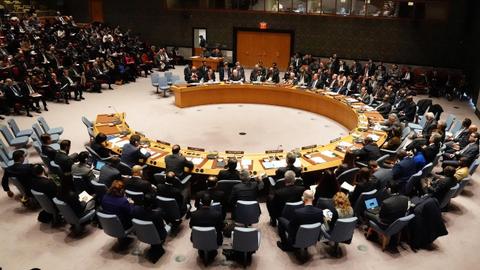