With the highest chore gap in the world, women in India currently spend 352 minutes per day on unpaid work, compared to the 52 minutes that men spend carrying out unpaid tasks.

KOLKATA, India —  It is 2pm and Kamaleswari Tanti is enjoying a short break, a moment of solitude before her children return from school and she gets busy again.

“I started working when I was pregnant with my second child,” she recalls. “Everyone at home objected. They said if I worked, it would affect the household chores that I alone was responsible for. But I persisted. I wanted to step out of the house and do something of my own.”

For the last nine years Tanti has been working as a community health worker under the National Rural Health Mission in the state of Assam.

Her work hours are odd and require her to go from house to house, sometimes being out all night in the case of a child delivery. But no matter the work, Tanti wakes up at 5am every morning to begin her household chores and rests her feet only after 10pm, sometimes staying up late to finish the record-keeping that her work requires.

During harvest season, she toils in their agricultural field as well. Until this year, when her salary was raised to 43 dollars per month, Tanti worked for a mere 14 dollars per month, with some allowances and incentives added to it. Her work load, though, is not limited to healthcare and has included election work and other campaigns.

India relies heavily on community workers like Tanti to reach its rural population and implement its policies. In spite of the low remuneration, they are among the small population of Indian women who are able to manage unpaid care work and challenge patriarchal structures to engage in paid work outside home. For millions of others, finding the time and opportunity for paid work still remains an unattainable goal.

Women in India currently spend 352 minutes per day on unpaid work, compared to the 52 minutes spent by men. This chore gap is among the highest in the world.

A recent report by the International Labour Organisation (ILO) points out that unpaid care work is the main reason why women are outside the labour force. Across the world, the report said, 606 million working-age women perform unpaid care work on a full-time basis compared to 41 million men. At the current rate, it would take 210 years to close the current gender gap in time spent in unpaid care work, keeping women at a continued disadvantage.

While this is a global phenomenon, it is especially acute in India where in spite of growing GDP, as well as improving literacy and falling fertility rates, the female labour force has declined sharply so that women, who constitute about half the country’s population, have a mere 24 percent participation in the labour workforce. This, too, is among the lowest in the world. At the same time, despite women’s decreasing labour force participation, their time poverty (or time spent in unpaid work) has still increased manifold, as pointed out in a recent Oxfam India report titled Mind the Gap.

India’s economic growth has been such that not enough job opportunities have been created that can easily absorb women, especially in rural areas, explains Sher Verick of ILO.

As more and more men migrate to towns and cities in search of jobs, women are left behind to take care of the remaining unpaid work that sustains the family. For instance, Mind the Gap highlights that, of the 60 million jobs created between 2000-2005, 14.6 million jobs were attributable to a rise in unpaid female family workers in the agricultural sector -- the paid jobs went to men and the unpaid ones were left for women. So, in spite of women’s contribution to the economy in one form or the other, the major chunk of their work -- unpaid domestic care -- remains invisible and unaccounted for in official statistics.

It is estimated that recognition of this work and direct public investment in the care economy of two percent of GDP could result in the creation of 11 million new jobs. Until then, Indian women will continue to struggle to find a place in the growing economy.

For 27-year-old Shampa Sardar, a resident of the city of Kolkata, marriage to her long-time partner came with several promises but ended with her being forced to leave, severely ill and with a five-year-old son in tow. Her day would begin at 5am and end at midnight, in between she did odd jobs to bring in extra income.

“My husband contributed a smaller monetary sum to the extended family in comparison to his brother so I had to make up for it by physically working doubly hard at home,” she said. Last year, when Sardar began training to be a professional driver, her husband and in-laws were unhappy with the time she spent outside home and she faced mental abuse for months.

Azad Foundation, where Sardar received her driving training, works with the aim to break stereotypical and patriarchal gender role divisions in the work space. The women they work with, explained Dolon Ganguly, Azad’s programme director in Kolkata, carry with them to training every day the burden of domestic violence, family resistance and household chores.

“Absenteeism is the biggest issue,” she said, owing to these factors. The way the foundation addressed this was by encouraging women to speak to family members about either sharing household chores or adjusting to their reduced time spent at home which could mean eating one curry instead of three. She also encouraged them to use their salaries on things like the purchase of a pressure cooker or renting a refrigerator, which could reduce the time spent cooking. Many women were successful, some dropped out.

Sardar now lives with her mother, working as a professional chauffeur and earning a hundred dollars a month. “I can finally buy milk and spinach and vitamins for myself, things I sacrificed earlier in spite of my poor health because I had to prioritise the needs of others first,” she said.

What needs to be done

For 40-year-old Sucharita Bhowmik, a civic volunteer with the Kolkata Police posted in the SSKM government hospital, living close to work and choosing to remain unmarried has made work satisfaction somewhat possible. “I have many other married women colleagues who travel for about two hours each way by train to get to the city for work,” she said, “Sometimes they get home by midnight and have to report for duty by 7am the next day. They get no rest. I think workplaces need to take into consideration these factors, the fact that these women need to do all the work at home too.”

According to Charity Tracy Moore, India Lead at Harvard Kennedy School’s Evidence for Policy Design, it is important that policies in the country encourage flexible and part-time work options for women. “Most women out of the labour force that say they are occupied with domestic duties, but willing to take on work, say they would like regular, part-time jobs,” she said. “Yet the jobs working women take on are largely full-time in India.” Moore suggests hiring additional frontline government workers like Tanti, who remain overworked in this understaffed sector, could be useful.

For women like Tanti and Sardar, child-care is a major concern and one that is solely left to the women. Tanti wishes her salary had been increased to reflect the actual work that she did, that way she would have had the money to hire another woman to take care of her son when he was little, instead of leaving him at the mercy of neighbours.

“I am lucky that my mother takes care of my son now, but what if one day it gets too much for her?” Sardar wondered out loud. “She, too, is a woman with the burden of household work after all. I am not sure what other options I have.”

Studies in India have concluded that the collection of wood for fuel and drinking water are the most time consuming forms of unpaid work for women. With access to a clean stove or LPG cylinder through government schemes, according to Mind the Gap, women can save about 70 hours per year.

To this effect, Moore points out the need to introduce labour-saving devices which would reduce the extent to which the burden of unpaid work falls on women. “Easy access to clean water, financing or subsidising technology that can reduce time in unpaid work, and encouraging the development of private or public-private solutions to allow women to spend more time on paid work are some of the things that can be helpful.” she added. “For instance, local day-care can both provide employment for some women while encouraging others to work.”

Sardar believes the amount of unpaid work women take up in India has a lot to do with lack of agency and so, a personal effort is required in which each woman begins to stand up for and prioritise herself, even if it comes at a cost. “We can’t wait for society to change,” she said. “We are the society; so if we change, society will slowly be forced to change with us.” Sarita Santoshini is an independent journalist based in India, reporting on human rights, development and gender issues. She has written for Al Jazeera English, The Christian Science Monitor, PRI, and The Caravan, among others. 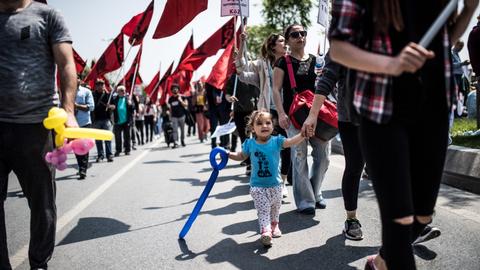 Getting women back to work in Turkey

India's labour woes put the Modi government at a disadvantage