How the Hindu right emerged in India's communist heartland

1
For Iranians, the US seizure of Iran-linked websites is a draconian move
2
Euro 2020 and Covid-19: WHO voices concern over crowded stadiums
3
The elephant in the room: Humans increasingly encroach on wildlife
4
Post Covid-19 France faces looming social and poverty crises
5
Why does Israel refuse to return the bodies of slain Palestinians?

A long-standing secular bastion of the country, West Bengal is one of the few states that hasn’t electorally succumbed to Hindutva. Over the last decade, however, that has changed.

From the top, Kakinara, a small town in the east Indian state of West Bengal, appears like a maze, a network of crisscrossing bylanes. In one of the lanes – line number 06 – lives Hena Parwin, who embroiders long skirts to run a household of six. Her sewing machine, the family’s lifeline, was looted in the summer of 2019 during a communal riot between Hindus and Muslims.

“The rioters – mainly locals – ransacked the room,” said Parwin, 27, sitting in the family's only room, sweaty and cramped, allotted to Parwin’s father, a jute mill worker who has now left the family.

“Only the Muslim families are targeted here,” she said. About 7,000 people live in the maze with 1,400 quarters allotted to workers of eight jute mills, half of which are closed.

The area, which is 80 percent Hindu with Muslims making up the difference, has witnessed systematic Hindu-Muslim violence over the last quarter of a decade affecting mostly Muslims, noted a fact finding report by An Assemblage of Movement Research and Appraisal (AAMRA), a civil society forum that documents communal conflicts.

The report named a series of neighbourhoods where Muslims were threatened, and the torching of their houses “became an everyday feature” since May 2019.

Hindus too were targeted in violence that occurred subsequently in June, and seven people, including five Hindus, were killed. A total of 29 people lost their jobs following the riot, 27 of which were Muslims and two were Hindus.

“We have not experienced so much communal tension during Communist rule,” said Renuka Devi, a homemaker in ward number eight, about 200 metres from Parwin’s quarter.

The division of India along communal lines in 1947 deeply fractured Hindu-Muslim relations in Bengal, home to about 100 million people. Leftists, led by Communist Party of India (CPI-M), came to power in 1977 after a prolonged struggle, grew in size and power over decades.

Being a regimented bloc, the Communists wielded firm control over all aspects of governance and society, often intervening in private lives. Nevertheless, they managed to reduce enmity between communities by “secularising the society with some degree of enlightened policies, preaching tolerance, peaceful coexistence,” said Ranabir Samaddar, an eminent Indian political scientist.

That all changed in 2011, when the Communists’ 34-year-long tenure was ended by the secular nationalist All India Trinamool Congress (AITC), around the time the Narendra Modi-led Hindu nationalist Bharatiya Janata Party (BJP) was on the upswing.

In hardly a decade, the BJP’s vote share shot up from 4 percent (2011) to 40 percent (2019) in Bengal, one of the last remaining states yet to be won by the Hindu right or its allies. The national Parliamentary poll - that BJP won twice since 2014 - and state Assembly elections are separately contested in India.

With the BJP’s countrywide expansion, the state – with about 30 million Muslims – was divided along communal lines and Islamophobic voices gripped Bengal, otherwise renowned as the intellectual cradle of the country.

“Muslims are buying expensive apartments in posh areas to sprawling shops in my locality. They are usurping properties,” said a north Kolkata-based medical doctor Biswajit Chandra, while a state government official complained that “Muslim colonies have a better water supply than Hindu areas.”

Other incidents followed: a group of madrassa teachers were evicted from a hotel in an upscale neighbourhood, and an assistant professor of media studies claimed that half a dozen men – “formerly with the CPI-M'' – arrived at her doorstep for funds to construct a temple for the Hindu warrior god Lord Ram in Ayodhya, where a 16th century mosque was demolished in 1992.

Low intensity communal riots – like the one in Kakinara – were routinely triggered, turning the state into a giant repository of Islamophobic sentiment.

“If you consider the volume and depth of these incidents, there would hardly be any doubt that the BJP and its frontal organisations’ concerted and virulent campaign has struck a latent chord in large sections of society,” Diptiman Ghosh, an industrialist and vice president of Indian National Congress in Bengal, told TRT World.

The sentiments are premised on the argument that the Hindu population dropped by eight percent, while Muslims’ increased from 19 to 27 percent since independence. While the argument is correct in absolute numbers, it is not accurate if a decline in birth rates are taken into account.

“The growth of Muslims is decreasing at a faster rate than the Hindus,” said noted economist and professor Achin Chakravarty at the Kolkata-based Institute of Development Studies.

Two academics, Subhanil Chowdhury and Saswata Ghosh, of the Kolkata-based Institute of Development Studies, concluded in a 2020 paper that the dip in fertility rate of Muslims in Bengal is the “highest in the country.”

“While the birth rate of the Hindus is dipping over years, the Muslim rate of growth dropped sharply since 2001,” they highlighted, and refuted the Hindu right-wing argument that Bengal has millions of infiltrators from neighbouring Muslim-majority Bangladesh as “a blatant lie”.

Professor Chakravarty added that the “population with access to development has a lower fertility rate.”

“West Bengal Muslims are predominantly rural and poor. But with some access to development their fertility rate is dropping,” he told TRT World.

But a variety of social, cultural or religious programmes of the Hindu right are based on the argument that Muslims may outnumber Hindus and that minorities are financially prospering.

Seemanta Chetana Mancha (SCM), a Hindu nationalist platform that claims to raise awareness about borders, is engaged in a programme to check property transfers to Muslims. SCM officials claim many Hindu families were selling their property to Muslims in central Bengal.

“We told them that if Hindu families leave the area, the border will be dominated by Muslims which is not conducive for the country’s security,” said Colonel Dipak Bhattacharya, the South Bengal president of the SCM in an earlier interview with The Hindu.

The flagship programme of the Rashtriya Swayamsevak Sangh (RSS), the parent body of the BJP, was nationally pivoted on Lord Ram. It paid rich dividends as the BJP rose in the 543-member national Parliament from two seats in 1984 to 303 in 2019. But the leadership was hesitant to introduce Ram to Bengal as he was never a major icon in a state packed with its own local gods.

One summer evening in 2019, sitting in the central Kolkata office of the Vishwa Hindu Parishad (VHP-World Hindu Council), an RSS-affiliate, senior functionary Sachindranath Sinha said that after much deliberation they decided to introduce Ram to Bengal as a youth icon.

Over the last decade, a matrix of ideological programmes targeting all social clusters and age groups has flourished in Bengal.

However, the BJP would face resistance from a small but influential section – the cultured class that refuses to accept a religion-based society. This loose federation of citizens, not affiliated to any political party, are relentlessly running campaigns to boycott the BJP in the upcoming provincial Assembly election by using video art, parodies, graffiti and public meetings.

“Such campaigns are powerful in Kolkata. It troubled communists a decade back and now returned to stop the march of Hindutva,” said Ronny Sen, an award winning filmmaker, speaking with TRT World.

Buoyed by the Hindu revivalist movement, the BJP has been surging ahead in West Bengal, and a victory may help the Hindu right in the 2022 Assembly elections in half a dozen states. If not, the opposition may get a toehold, which has eluded them so far.

The stakes couldn’t be higher: if one of the last secular-strongholds were to fall, the Hindu right’s confidence – currently dampened by the farmers’ protests and economic slowdown – will soar. 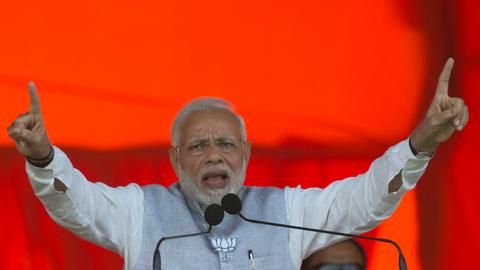 India marches towards a saffron republic

1
For Iranians, the US seizure of Iran-linked websites is a draconian move
2
Euro 2020 and Covid-19: WHO voices concern over crowded stadiums
3
The elephant in the room: Humans increasingly encroach on wildlife
4
Post Covid-19 France faces looming social and poverty crises
5
Why does Israel refuse to return the bodies of slain Palestinians?