Afghans mired in a tussle between the Kabul government, the Taliban and an ongoing US occupation, look for a way to create a better society.

Afghans came out to vote despite serious risks to people's lives as over a hundred attacks took place on election day.

The day before the election, on Friday 19 October, was important for both the Afghan government and the Taliban, as both parties called on local imams in their respective territories to deliver their message to people.

The president of Afghanistan, in a televised message, called on people to go and cast their vote, he also called on imams of mosques to encourage people to play their part in the parliamentary elections during their Friday sermons.

On the other hand the Taliban instructed “all its mujahideen to halt this American-led process throughout the country by creating severe obstacles.”

During the Friday sermon just a day before the election, the imam in Breshna Kot, a district in Kabul, called on people “to vote and elect their representatives" though he added not to vote for women. He emphasised that they will not be able to represent the people in the best possible way.

The polls opened at 7 in the morning, and should have ended around 4pm. The  high turnout was unprecedented, and many voters reached polling stations before they opened, and waited hours to cast their vote.

Nonetheless, there were several complications and difficulties that can be mostly attributed to the mismanagement by the Afghanistan Independent Election Commission (IEC).

On top of mismanagement, the Taliban attacked several polling stations in Kabul and many other provinces.

On the first day, the IEC citing technical and logistical problems, extended the election until Sunday 21 October 4pm.

One election observer said, “although I am an observer I am not allowed to go inside the polling station, the police tells me you are not allowed, I was asked to come at six o’clock in the morning and now it’s nine, but the polling station is not yet opened, they say the materials are finished, how it could be, if the voting process hasn’t started yet?”

With questions piling up about why polling stations hadn't been opened, police started concocting all sorts of excuses to keep people in line.

The newly introduced biometric procedures seemed to have not functioned well, it was reported that the biometric Voter Verification (BVV) devices were unable to read voter fingerprints.

It has also been reported that the devices were lacking the batteries to function, and some devices malfunctioned and jammed, as one of the election observers said, “it’s a total waste, the device does not function well, and most of the Election Commission staff do not know how the device works.”

In several polling centers in Taloqan city there were issues with the biometric systems as voters were asked to cast ballots without fingerprints. The problems voters faced was not only that the biometric device malfunctioned, but there were complications in finding voter names on the voters list.

“It took several minutes for IEC staff to find the voter's name,” said a voter casting his vote on the second day of the election.

In some polling centers, after not finding their names, the voters left saying they would come back later.

Asad, a voter in his late 30s, said, “I went early in the morning to cast my vote after waiting for 3 hours, I decided to go home and come later, but at the end I was not willing to go again and stand in line.”

Another problem was the closure of polling centers in Kabul and throughout Afghanistan.

The Afghanistan Independent Election Commission by the end of the first day announced that from 5074 polling centers across the country, including Kandahar, 4530 were open, 371 remained closed due to technical problems - out of which 45 were in Kabul.

At noon, one of the country’s major observer organisations, the Free and Fair Election Foundation of Afghanistan (FEFA) said, “the situation is out of the control of the Afghanistan Independent Election Commission.”

Mariam Soliamankhail a parliamentary election candidate representing the Kuchi nomads, one of Afghanistans patchwork of tribes said, “after trying to vote 4 times, I was still denied the right to cast my vote.”

She further added that there was lack of ballot boxes for Kuchis.

"I have 100s of Kuchis who have spent money to get to different polling centers to vote for me only to be told there is either no Kuchi ballot papers or the Kuchi voter list.”

Coupled with the technical and logistical problems Afghan voters faced the wrath of the Taliban violence.

The first explosion took place in Arzan Qemat police district 12 of Kabul, by the time polling stations had closed, several explosions were recorded.

Minister of Interior Wais Barmak told Tolo news by “the end of the first day 192 security incidents had been reported countrywide as people cast their votes”.

However the numbers of killed and wounded differed according to various sources.

The ministry of interior said 17 civilians were killed and 83 were wounded, on the other hand, Pajhwok news reported at least 44 people were killed and 238 others wounded.

The number is likely to increase.

The Taliban who had previously warned of attacking polling centers said they had conducted 407 attacks across Afghanistan, however, they did not say anything about an exact number of casualties.

People’s willingness to exercise their right to vote

People’s enthusiasm to participate in the election despite the challenges and deadly attacks by the Taliban is commendable.

The hope of generational change compels them to go and cast their vote.

Ali, a voter, in his mid-20s said, “I left my home and when I reached in District 2 Wazeer Akbar Khan polling station to cast my vote, I heard a huge blast, suddenly everyone was running. I was told it was suicide bomber later, I saw so many people scatter around in blood, then I decided to go back home, as the polling station was locked down soon after but I came around 4pm and cast my vote.”

The polling stations were closed for a couple of hours.

Many people died to exercise their right to vote and support Afghanistan's democracy, yet many. due to the mismanagement of the election process, were denied the right to case their vote.

Afghanistan's Election Commission by the end of the second day announced that more than three million Afghans took part in the first day of parliamentary elections where 67 percent of the voters were men and 33 percent women.

Haji Shokour, in his late 50s, said, “I want to vote and elect a young man who knows both the national languages so he would be able to represent us well. A good level of education and a little English would make a good candidate.”

Another voter said that, “although there is a risk of being killed today I am ready to take the risk to elect an honest representative for the next four years.”

And with that, Afghans remain determined to shape a better future in a country so often mired in violence and instability. 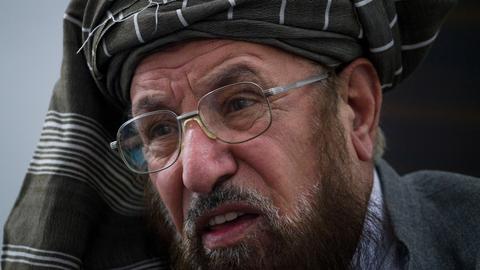