Following the contentious designation of the Houthis as a foreign terrorist organisation, the State Department and aid organisations are confronted with challenges on how to keep the aid flowing in Yemen without fuelling the Houthi war machine.

The twentieth of January marked the inauguration of the 46th President of the United States, in the US Capitol, a seat of power which increasingly resembles a green zone. President Biden is tasked with healing the heart of American democracy. But also, more than 7000 miles away, Yemen is confronted with the aftermath of the US State Department’s eleventh-hour decision (effective January 19) to designate the Houthis as a foreign terrorist organisation.

Aid organisations operating in Yemen have described this move as a “death sentence”, “pure diplomatic vandalism” and a decision which will “fuel the flames of war and starvation for millions of Yemenis.” The UN has warned the decision is likely to lead to famine on a scale not seen for 40 years.

Mark Lowcock, the director-general of the United Nations Office for the Coordination of Humanitarian Affairs, called for the decision to be reversed last week.

Can the Foreign Terrorist Organisation (FTO) designation be reversed?

The designation can be amended, modified or cancelled with a signature from the incoming Secretary of State nominee, Antony Blinken, according to Dave Harden at Georgetown Strategy Group, a Washington DC-based consulting firm.  “The incoming administration can amend the designation and allow for a full Yemen policy review required under National Defense Authorisation Act Section 1295, due May 3,” said Harden, who also worked in the US Agency for International Development under the Obama Administration.

On January 19, the department issued the necessary general licenses to allow for the uninterrupted flow of humanitarian aid, including Covid-19 related supplies. At first glance, Sultana Begum at the Norwegian Refugee Council said that there are ambiguities and uncertainties and a lot will depend on how these licenses are interpreted and implemented.

It is still not clear if aid organisations are fully safeguarded from prosecution, she added. If any activity touches the international financial banking system it will cease, Harden warned, adding that private sector traders will be unable to operate in the absence of clear language on exemptions and licenses. Even before the conflict, Yemen relied on 90 per cent food imports, chiefly wheat and rice.

Meanwhile, Yemenis at home and the diaspora, aid groups and diplomats confront a moral dilemma: they are aware that the designation will deepen suffering but is essential to restricting terrorism.

For Abdulkader Alguneid, a Yemeni physician and activist, the move is long overdue.“Breaking the Houthis war machine is the only way to end the war in Yemen, but it’s a process,” he said from his home in Canada. He was forcibly taken from his house in Taiz in southwestern Yemen in 2015 and was held captive in a Houthi prison on the outskirts of Sana’a for 300 days.

“This move [FTO designation] will deprive Houthis from corruption, wealth and their laundering activities,” Alguneid insisted.

After seizing control of the capital Sana’a in September 2014, the Houthis occupied central state institutions. In January 2015, they unseated Yemen’s prime minister and president. They fled to Aden and then Riyadh in Saudi Arabia, from where they have been operating since. The Yemeni government was cajoled into signing an UN-backed Peace and National Partnership Agreement in 2014 which stipulated the inclusion of Houthis as political advisors. The Houthis have never honoured any UN-brokered peace agreements.

Colonel Abbas Dahouk, US defence attaché to Riyadh between 2014 - 2017, views the designation as pressure from the Trump administration on Iran (rather than a move to appease the Saudis). But Harden said the Saudis strongly advocated for the terrorist designation without weighing up the humanitarian and economic consequences.

Since the start of the Saudi bombing campaign in March 2015, the Houthis have consolidated their ground and air military capabilities and have access to sophisticated weapons ranging from tanks and technical vehicles to anti-tank guided missiles and long-range ballistic missiles with a reach of 15 hundred kilometres or so outside Yemen’s borders.

“Manufacturing of the UAVs and modified missiles was done in Yemen. Expertise was coming from Hezbollah and the Quds force ( one of the branches of Iran's Islamic Revolutionary Guard Corps),” added Dahouk, who was also senior military advisor at the State Department’s Bureau of Near Eastern Affairs [2017 - 2019].

In areas under their control, the Houthis have unlawfully detained, tortured and killed thousands of prisoners, recruited child soldiers, planted landmines, disrupted the schools and education systems for millions of Yemeni children, weaponised the internet for their gain, forcibly caused the disappearance of women activists, shelled a prison killing six women and a baby, and more recently, killed a mother in front of her young children.

“If this isn’t terrorism, I’m not sure what you call it,” says Baraa Shiban, a caseworker with the human rights organisation, Reprieve, fearing they will usurp local and international aid programmes and businesses in northern Yemen.

Reversing the designation sends the wrong signal that the Houthis are safe to hold civilians, aid and humanitarian workers hostage, he said, adding that the local alliances the Houthis have been building will now start to reconsider and rethink their relationships with the militia.

What we need, Shiban emphasised, is an active policy to ensure the smooth flow of humanitarian supplies without enriching the Houthis in the process.

The idea that economic pressure on the Houthis will yield political change is insubstantial, Harden argues. If anything, Abbas pointed out that history has shown such sanctions have had minimal impact on comparable groups such as Hezbollah, Hamas and the Quds Force.

On Tuesday afternoon, in response to a question on Yemen from Senator Chris Murphy at the congressional hearings, Blinken said President-elect Biden would end military support for the Saudi role in the war in Yemen in keeping with his presidential campaign promise.

Gerald Feierstein, US Ambassador to Yemen under Barack Obama, said Biden’s position was driven both by the need both to address the humanitarian catastrophe in Yemen and to resume engagement with Iran (thus reducing the threat of regional conflict).

If we are to predict the new US administration’s policies, we need to look at Obama’s presidency, says Abdulhakim Barbba, a Yemeni economist in D.C. “Biden's foreign policy will not differ much from Obama’s.”

“If they want to punish the Saudis, the only thing they can do is limit arms sales to the Saudis,” he added.

The Trump administration lifted suspensions on several arms deals which the Obama team had put in place. Trump’s team then expedited arms sales to Saudi, UAE and Jordan, using emergency powers, putting US economic benefits before human rights. Still, the bulk of the arms deals ($115 billion) with Saudi Arabia was agreed during Obama’s eight years in office - more than any previous US administration. Barbba says that the US will never give up supporting Saudi Arabia because it is one of America's most important allies in the Middle East.

Dahouk said Obama did not prioritise Yemen and Yemen will continue to be seen through the Saudi-Iran prism. In his second term, Obama suspended sales owing to public pressure from humanitarian groups and think tanks. But, he continued to provide minimum support on the Saudi air refuelling and turned a blind eye to Iranian interference, said Abbas.  Harden thinks economic-supported deconfliction to yield political change would have a greater impact. “Better economic policies would yield better political outcomes.”

Feirstein is cautiously hopeful: “We can anticipate that the new administration will reverse the Houthi designation quickly and press forward with its support of the UN-led negotiations, including pressing Saudi Arabia and the United Arab Emirates to support an end to the fighting.” 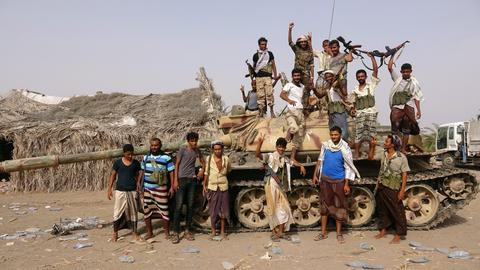