If history is any kind of guide, then, Russian and American leaders will try to reinforce their respective spheres of influence in different parts of the world.

Russian and American leaders have come together on a number of occasions to discuss global issues, including their respective spheres of influence.

But the upcoming meeting Putin has with the current US President Joe Biden in Geneva has some experts making comparisons with an eventful interaction between the leaders of the two superpowers that took place in the same city more than 30 years ago.

Soviet Union leader Mihail Gorbachev and President Ronald Reagan met in Geneva, the Swiss city, in 1985 as the Cold War was coming to an end.

They discussed matters like the arms race, ways to reduce nuclear weapons and redrawing their of areas of influence.

“Gorbachev was trying to manage a Soviet Union in precipitous decline vis-a-vis the United States in every dimension of hard and soft power, including  economic, demographic, ideological, and military standing whereas the United States was approaching a kind of peak of its relative power under Reagan,” says Sener Akturk, a political science professor at Koc University.

“Biden, if anything, resembles Gorbachev if not  [Soviet leader Leonid] Brezhnev in the American context, whereas Putin made the best of a rather weak hand as many have noted, and represents a resurgent Russia, and has more of [Soviet leader Nikita] Khrushchev's "we will bury you" attitude rather than Gorbachev,” Akturk tells TRT World.

“Thus, if anything, the tables are almost but not quite turned, when it comes to comparing the Biden-Putin meeting in Geneva with the Gorbachev-Reagan meeting in 1985 in Geneva,” Akturk adds.

Putin and Biden will meet in the backdrop of a different international political scene as Moscow pursues an aggressive foreign policy across the Middle East and remains heavily involved in the internal matters of Ukraine and Belarus.

What to expect from the Biden-Putin meeting?

Akturk expects no breakthroughs on major outstanding bottlenecks such as the stalemate in Ukraine and Syria, where Moscow and Washington have been at opposite ends.

The diplomatic impasse will likely persist as the US struggles to push back against Russian influence in countries such as Syria where Moscow has militarily backed Bashar al Assad’s regime. Similarly pro-Russian armed groups have claimed much of eastern Ukraine.

Belarus, a country in Russia’s backyard, is another area where the two powers are at loggerheads.

Russia appears the least interested in offering any concessions to the US in the eastern European state, where pro-democracy protests have called for the resignation of a Moscow-backed president, says Esref Yalinkilicli, a Moscow-based Eurasia political analyst.

“Russia does not want Belarus to be the second Ukraine,” Yalinkilicli tells TRT World, referring to the Ukrainian pro-democracy movement, which played a key role in dislodging the Russian-backed government in Kiev in 2014.

“After the Ukrainian experience, Russia will not allow another country like Belarus to be alienated from itself.”

The Americans and Russians have faced off on other issues in recent years including Moscow’s alleged meddling in the US elections and cyberwarfare.

The Biden administration recently ramped up pressure on Moscow with sanctions following the poisoning of pro-democracy Russian activist Alexei Navalny.

In the wake of so many challenges, Moscow still views the Biden-Putin summit as a way of opening new channels that can help dialogue, says Yalinkilicli.

“But Russians do not expect any breakthroughs on regional issues,” says Yalinkilicli. Kremlin spokesman, Dmitry Peskov, also underlined that people need to lower their expectations.

A match of wits

If words are any guide, then Biden and Putin are up for a match of wits.

The two leaders met before, in 2011, when Biden was vice-president serving under Barack Obama, and Putin was prime minister.

During the meeting that took place in the Kremlin, Biden mocked Putin after visiting his “magnificent” office. “It’s amazing what capitalism will do, won’t it?” Putin laughed at Biden's words. Then, Biden said: “Mr. Prime Minister, I’m looking into your eyes, and I don’t think you have a soul.”

“We understand one another”, Putin replied to Biden.

More recently, Biden has used harsher words for Putin, calling him a “killer” and threatening to make him pay a price for his meddling in the US elections. Putin gave a characteristic response to him. “He who calls names, is called that himself”, he said, quoting a schoolyard saying.

Since Biden took office earlier this year, the two sides have made little progress in settling their pending issues except for extending the validity of New START (Strategic Arms Reduction Treaty), an agreement to limit the production of strategic weapons, until 2026, according to Yalinkilicli.

Despite lower expectations, Russia will try to arrive at an understanding with the US on matters of security, he adds. 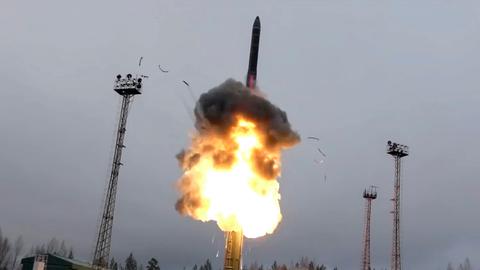