'Oh God, what is our crime?': Afghan Hazaras recount the bloody Tuesday

The victims of a long-persecuted minority continue to find themselves trapped in a cycle of violence, with Daesh-K turning their guns on them to rattle the Taliban government.

A few hours after twin explosions rocked the Abdul Rahim Shaheed High School in Afghanistan’s capital city on Tuesday, April 19, there was little left inside the school beyond bloodstains, broken glass and many torn school bags.

Residents, along with municipality workers, were seen washing off fresh blood and clearing debris and any other signs of the attack that officially killed six people.

Omid Bahrami, 26, a resident of Kabul, was one of those who helped clean up.

He was also an eyewitness to the blasts in and outside the school, which is located within the predominantly Hazara Shia neighbourhood of Dasht-e-Barchi in West Kabul.

In the two-stage attack, the first explosion occurred inside the school and a second roughly 10 minutes later near the school gate on a side street, killing and injuring several people who panicked and rushed to escape, according to eyewitnesses.

We appeal to @hrw and @amnesty to put resources investigating the ongoing slaughtering of the Hazara in Afghanistan. We are not safe in school, on the street, in hospital, in the mosque...2 #StopHazaraGenocide

The blasts took more lives than what is being reported by the Taliban, Bahrami says.

“In the morning, I saw students going to the school with smiling faces, books, and pens. A few hours later, I washed their blood in the streets,” he tells TRT World.

“I carried 14 dead bodies alone on my shoulder to help them reach the hospital as the side street was narrow and the ambulance could not get inside there. There were several other dead being taken to the hospital by other people.”

Many residents in the neighbourhood belong to the Shia Hazara community, an ethnic and religious minority frequently targeted by the Daesh-K group.

For decades, the Hazara community has seen sheer brutality in attacks against them, from newborn babies soaked in blood after an attack on a maternity ward, to weddings, mosques, and even sports clubs becoming sites of massacres.

On the afternoon of April 19, when Muhammad Hassan heard about the attack on the school, he called his 18-year-old son to check if he was safe, but his phone was switched off.

Today, a series of bomb blasts in Abdul Rahim Shaheed High School and near the Mumtaz Education Center, both of which are located within the predominately Hazara Shiite neighbourhood of Dasht-e-Barchi in West Kabul, killed 6 and injured at least 11 others.

Upon reaching the site of the attack, Hassan found out that all injured and dead had been transferred to Muhammad Ali Jinnah Hospital in Kabul.

“My son was among those who rushed to the exit and was then killed in the second blast. I found his body at the hospital,” he tells TRT World.

“Milad was passionate about boxing. He used to go to Maiwand Club for practice. He was my eldest child, I have two other boys and three daughters. He was the light of our house. He wanted to become a doctor to help the people and serve his parents.”

While Hassan is devastated, his wife is in a state of shock.

Another parent, Nasurallah Faizi, who also lost his 18-year-old son Mehdi in the attack, wailed, “Oh God, what is our crime?”

The Taliban, who took over Kabul last year and became Afghanistan's new government, condemned the attack on the school.

But many Afghan Hazaras doubt that they will bring the perpetrators to justice.

However, the Taliban, who targeted the Hazaras as heretics during their rule in the 1990s, are now their only protection against a common enemy: Daesh-K.

On several occasions, they have vowed to protect the Hazaras, but many still deeply distrust the new rulers, who are predominantly ethnic Pashtun.

“Hazaras have been oppressed, persecuted, excluded, faced genocide many times, lived under systematic discrimination and dehumanised for being Hazara during the whole history of this country,” Ali Folladwand, a Hazara activist, tells TRT World.

“The protection of the Taliban is a joke. No government could protect Hazaras because they didn't want to.”

Right now I had an interview with a Radio based in the USA about today's blast in a #Hazara #Shitte mosque, believe me, I don't know how I answered their questions.💔
Heartbroken #StopHazaraGenocide
Second cousin Cousin
Killed Injured pic.twitter.com/0USILO5c2l

On April 21, at least 12 people were killed at a Shia mosque in the city of Mazar-e-Sharif’s Balkh province,  in a bomb attack claimed by the Daesh-K group.

Another 58 were wounded, including 32 in serious condition, in the blast at the Seh Dokan mosque.

The Taliban said they had arrested the Daesh-K "mastermind" of Thursday's bombing at the mosque.

On the same day, at least four more people were killed in Kunduz and 18 others wounded by a bomb that targeted a vehicle carrying mechanics working for the Taliban government, police spokesperson Obaidullah Abedi said.

On Friday, a blast ripped through a Sunni mosque during Friday prayers, also in Kunduz, and killed 33 people.

Security analysts say the Taliban continues to downplay the threat of Daesh-K in Afghanistan, but some of the major attacks claimed by the terror group in the country, prove otherwise.

“They show that not only is the Taliban’s threat assessment hollow, but also that the Taliban remains unable to provide security to the most vulnerable in areas which should be relatively secure,” Asfandyar Mir, a senior security expert at the US Institute of Peace, tells TRT World.

READ MORE: Hazara farmers: Taliban has ordered thousands of us off our lands

Although the overall security scenario in Afghanistan has improved following the Taliban takeover in August last year, Mir says, sporadic violence persists, with Daesh-K posing a threat from the east and south of the country, where they have "a large fighting force and strong networks in the Salafi enclaves".

"The current leader of Daesh-K, Shahab al Muhajir, appears to have considerable skill at plotting and directing mass-casualty attacks. He remains at large for now," Mir says, adding that the forces of Tehreek-e-Taliban Pakistan are operating from Afghanistan with relative impunity, carrying out regular cross-border attacks.

Daesh-K has long engaged in what political scientists refer to as out-bidding violence – spectacular, horrific attacks against the most vulnerable in Afghanistan to distinguish and assert its supposedly puritanical ideology, Mir explains.

Using macabre violence, he says, is also used as a tool to grab attention from individuals with an extremist bent of mind.

"This week’s troubling attacks are consistent with the logic of out-bidding,” he adds.

The Taliban, however, reiterates that the perpetrators of the attacks on the Hazara community will be brought to justice.

“The majority of the Hazara are Shia Muslims, and they have full and equal rights like any Afghan. There is no discrimination against them,” Taliban spokesperson Suhail Shaheen tells TRT World.

“We assure them, the current government is committed to their rights and will protect them at all costs.”

Back in Kabul, Somaiya, 23, who lives close to the school, is struggling to cope with the attack. She says the severity of the blasts was very high.

“All the glasses in our homes are broken. When I gathered the pieces of scattered meat and bones from the yard and the glass, I was scared and could not get up,” she tells TRT World.

“The whole streets were full of bloody books and families wailing for their lost loved ones. It was so horrible that I can still hear the screams in my head.”

With reporting by Muhibullah Shadan in Kabul 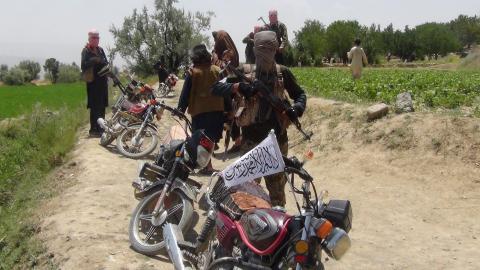