1
The Ataturk Arboretum: a live plant museum in the midst of Istanbul
2
Why are the origins of so many Covid-19 cases still a mystery?
3
The suffering of Zambians means profits for private creditors
4
Syrian regime tortured 98 people despite 2018 amnesty decree
5
Pakistan condemns France’s treatment of Muslims amidst ongoing outcry

In pictures: More and more gated communities are sprouting in Argentina's suburbs, giving a major boost to private security firms.

In the suburbs adjacent to the major cities of Argentina, a surge in street crime and burglaries has increased demand for private security guards and surveillance systems.

Many people say insecurity will persist until the government finds a way to fix an ailing economy and rampant drug abuse.

According to the US-based Global Research, Argentina features as one of the leading countries in the number of private security personnel per 100,000 inhabitants.

A house in an elite neighbourhood in Cordoba city. Since the beginning of the 1990s, middle and upper-class urban families, worried by rising crime, a product, in part, of the neo-liberal policies of former President Carlos Menem and current administration of Mauricio Macri, left their old neighbourhoods, and began to live in private, closed, and secured gated compounds in the outskirts of major cities.

Checkpoints to get in and out of these neighbourhoods have become a visible symbol of discrimination. While owners and visitors enjoy fancy access points, the construction workers, and gardeners, enter through the "controlled gates" manned by private security personnel.

Gabriel Velez, 43, is a former military man. He has been working as a private guard for 20 years. He earns about $500 per month and supports a family of seven – that's the minimum an average family needs to remain above the poverty line.

A private security gate in a corner of a public neighbourhood. As police fail to guarantee protection, those who can pay in Cordoba, secure themselves with private security.

Most private neighbourhoods are located in the suburbs next to major cities, or in close proximity to slums and working class neighbourhoods.

Major global players are active in the Argentinean security market. Compared to other crime-ridden South American countries, Argentina sees 5.5 murders per 100,000 people, a stat that is not very alarming. Still, a sense of insecurity has gripped the rich and middle-class because of economic deterioration, which has left many people jobless.

Neighbours of Parque las Delicias painted a part of the landscape before the “wall of shame,” as they call it, was built. Many people in this neighbourhood work on the other side of the wall and have to climb it to have “easy” access from their workplaces to their homes. 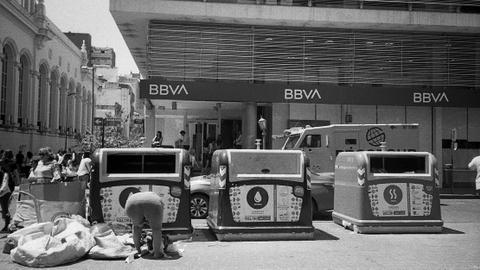 Argentina in pictures: On the edge of social chaos

1
The Ataturk Arboretum: a live plant museum in the midst of Istanbul
2
Why are the origins of so many Covid-19 cases still a mystery?
3
The suffering of Zambians means profits for private creditors
4
Syrian regime tortured 98 people despite 2018 amnesty decree
5
Pakistan condemns France’s treatment of Muslims amidst ongoing outcry