Rohingya soon to have their first Quran translation

The persecuted Muslim group doesn’t have a Rohingya translation of Islam’s holiest book.

For the first time, the Rohingya Muslims will be able to listen to an authentic recitation of the Quran in their own language as an audio and video translation of Islam’s holiest scripture will go online in a few days.

The translation, which is based on Saudi Arabia’s King Fahad English version of the Quran, will be released in instalments with the first few parts expected to be shared in the coming Ramadan,  starting from mid-April, the organisers behind the project tell TRT World.

Rohingya are one of the most persecuted minorities in the world, according to the United Nations. More than 800,000 people, a large number of women and children among them, have been forced to flee their homes in Myanmar after a brutal military operation.

But decades of persecution and state censure by the Buddhist government also decimated the Rohingya language with their books and scriptures destroyed and education banned.

“We were not allowed to read and write in Rohingya. They will give us maximum punishment for that, which was either being killed or getting jailed,” says Muhammad Noor, co-founder of a media company, RVision, which is part of the translation campaign.

Past attempts at the Rohingya translation have been incomplete and mostly been in the text form, which used Urdu, Arabic or Latin alphabets, he says.

Illiteracy is rife among the Rohingyas -  most of whom now live in congested refugee camps in Bangladesh. They have been deprived of education and jobs for decades by the Myanmar state, which even refuses to call the ethnic minority by its name.

It is the Rohingya diaspora, such as Noor whose parents fled Myanmar in the 1960s to the Middle East, that has been trying to revive the community’s culture and heritage.

But while the Rohingya language is spoken and understood by 1.8 million people, its written format- the alphabets and vocabulary - has gone through several changes over the centuries.

In the 1980s, a Rohingya scholar, Maulana Muhammad Hanif, who lives in Bangladesh, finally developed a language system now known as the Rohingya Hanifi, to standardise the language and make it easy for people to learn it.

“So what happened was that people who were educated in Pakistan or India were inclined towards an Urdu translation of the Quran and those who were born and raised  in Arab countries relied on the Arabic font. But most Rohingyas can’t read any of that,” says Noor.

“We want to do audio and video of Rohingya translation so it can reach the grassroots people. So this campaign doesn’t focus on a text version right now. Maybe we will take it up later.”

Sponsors of the translation are particularly concerned about the activities of Christian missionaries in refugee camps. Evangelical charities have already translated parts of the Bible into the Rohingya language.

The UN has prohibited aid groups from trying to influence the religious beliefs of vulnerable communities such as the Rohingyas. But evangelical groups openly discuss ways of luring people outside the camps, such as to missionary-run clinics, to expose them to their own teachings.

The translation project, which is supported by Noor’s Rohingya Vision and the Malaysia-based Dakwah Corner Bookstore (DCB), is aiming to raise 360,000 Malaysian ringgit (around $87,000).

It will use the Arabic recitation of the late cleric Sheikh Muhammad Ayyoub, who was born in Makkah to Rohingya refugees in the 1950s, and who later went on to become the Imam of Medina, one of Islam’s holiest sites.

Qutub Shah, the preacher translating the Quran into the Rohingya language, is a former mechanical engineering student who wasn’t allowed to complete his studies by the Myanmar state. He’s a PhD student in comparative religion at the International Islamic University Malaysia.

Even though the Quran has been translated into dozens of languages, the process of interpretation and especially the exegesis - the long footnotes - is never easy.

For instance, in English-speaking countries, the translation done by Abdullah Yusuf Ali released in the 1930s remained one of the most read 50 years later. In many places, it was the only one widely available.

To keep it simple and close to the actual meaning, the Rohingya translation will be verbatim from Arabic and Urdu samples. It won’t have the exegesis for now in the audio and video releases.

“This is like ground zero, this is the first proper translation,” says Zahid Mateen, who works for the GlobalSadaqah.com, which is also part of the campaign.

“A translation becomes difficult in Rohingya because the language has not developed properly per se. So in Urdu or English you have multiple scholars and past work to develop upon. Not in Rohingya.” 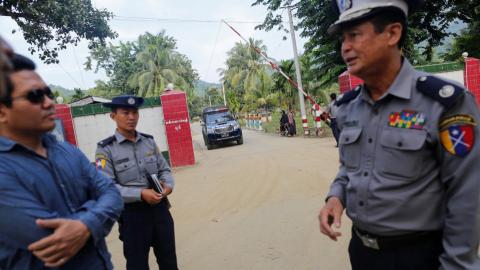