1
Will the UK be able to shape global AI standards?
2
President Saied's 'online consultation' leaves Tunisians on edge
3
‘Tax us now’: Millionaires call out to global leaders
4
What are Egyptians saying on the eve of the January 25 revolution?
5
Paigham-e-Pakistan: Why Daesh loves to hate pledge on religious harmony

Faced with funding shortfalls, the UN has already ended a vaccination campaign and scrapped plans for nutrition centres, shelters and mental health clinics and has shuttered a water purification plant for farmers.

UNITED NATIONS — Saudi Arabia and the United Arab Emirates are not stumping up the aid money they pledged earlier this year and millions of Yemenis face hunger, disease and death as a result, the United Nations says.

Lise Grande, the UN’s humanitarian coordinator for Yemen, said Wednesday that 22 life-saving schemes for Yemenis could be axed because donors have not even handed over half of the money from this year’s $2.6 billion funding appeal.

Riyadh and Abu Dhabi pledged a total of $1.5 billion at that fundraiser in February. To date, the Gulf powers have only delivered $414 million, or 28 percent of the amount pledged, a UN spokesman told TRT World.

“We are desperate for the funds that were promised,” Grande said in a statement. “When money doesn’t come, people die.”

The UAE and Saudi missions to the UN did not reply to TRT World’s requests for comment. In the past, diplomats from the Gulf countries have disagreed with the UN over how much money they have paid to aid schemes.

The two nations are key players in a Western-backed military coalition that intervened in Yemen in 2015 in a bid to restore the government of President Abd-Rabbu Mansour Hadi, who was ousted from power by the Iran-aligned Houthi movement the previous year.

The turbulent country has been devastated the UN calls the world's worst humanitarian crisis, with tens of thousands killed, many more left homeless and more than two-thirds of the population needing handouts.

Faced with funding shortfalls, the UN has already ended a vaccination campaign and scrapped plans for nutrition centres, shelters and mental health clinics and has shuttered a water purification plant for farmers.

Within days, water and sanitation schemes will be axed in four of Yemen’s governorates, exposing 300,000 displaced people to a deadly cholera epidemic. By the end of September, the cutbacks will have impacted 1 million others.

“Unless the funds promised at the February conference are received in the coming weeks, food rations for 12 million people will be reduced and at least 2.5 million malnourished children will be cut off from services which have been keeping them alive,” said UN spokesman Stephane Dujarric.

Some 19 million people could lose access to health care, tens of thousands of Yemenis could be made homeless and clean water would stop flowing for five million people at the end of October, Dujarric added.

“All of us are ashamed by the situation. It’s heart-breaking to look a family in the eye and say we have no money to help,” said Grande.

The UN raised the alarm amid heightened tensions in Yemen, where armed southern secessionists armed and trained by the UAE this month seized the presidential palace in Aden, the temporary seat of Hadi’s government.

The putsch underscored the fragility of Hadi’s government and exposed tensions between Saudi Arabia and the UAE, as combatants in the southern port city are nominal allies in the Saudi-led coalition.

Addressing the UN Security Council this week, Ursula Mueller, the assistant secretary-general for humanitarian affairs and deputy emergency relief coordinator, said  clashes in Aden had killed or injured some 300 people.

“Events in Yemen over the past several weeks have shown – yet again – just how volatile and devastating this war is,” said Mueller. “We urgently need de-escalation across Yemen, ideally through a nationwide ceasefire that will end all violence.” 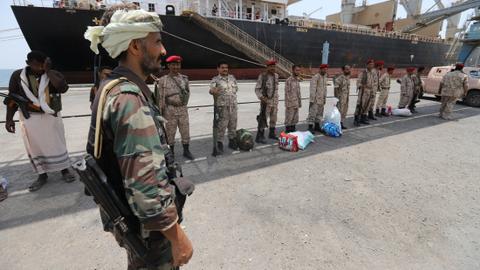 Stockholm agreement on Yemen’s west coast: what you need to know

Saudis dealt another military blow, if Yemen’s Houthis are to be believed 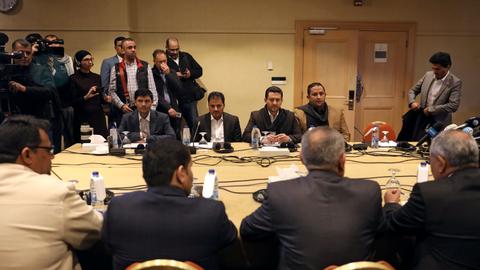 1
Will the UK be able to shape global AI standards?
2
President Saied's 'online consultation' leaves Tunisians on edge
3
‘Tax us now’: Millionaires call out to global leaders
4
What are Egyptians saying on the eve of the January 25 revolution?
5
Paigham-e-Pakistan: Why Daesh loves to hate pledge on religious harmony