The war in Syria, now in its eighth year, has seen children paying the heaviest price. At least 33 have been killed since June this year, compared to 31 children during the entirety of 2018.

The image of five-year-old Riham desperately trying to rescue her baby sister from the rubble of her bombed home is a grim reminder of the brutality of Syria’s eight-year war.

Her home in opposition-held Idlib was reportedly hit by a Syrian regime airstrike.

Syrian media outlet SY24 showed Riham pinned to rubble, holding on to her sister by her clothes in an attempt to stop her from falling while their father frantically tried to reach them.

A five-year-old Syrian girl died after trying to save her baby sister when their home was bombed in Idlib pic.twitter.com/uRQIhhjkqW

As rescuers rushed to save them, the building collapsed.

Riham and her seven-month-old sibling were taken to a hospital where Riham reportedly died of her injuries. The children’s mother was also killed in the attack.

The chaos of war in Syria continues to devastate the lives of children within the country and beyond.

Violence, displacement, and the everyday struggle for survival have not only scarred them physically but psychologically as well.

The regime and Russia have stepped up their deadly bombardment of Idlib province and adjacent areas in Aleppo and Hama provinces.

Bodies have been torn apart, some burnt beyond recognition.

According to the UN and field reports, women and children are the worst affected, some of them suffering the most horrific injuries.

Sonia Khush, Save the Children’s Syria Response Director, describes the situation in Idlib as “a nightmare”.

“The injuries we are seeing are horrific. It’s clear that once again children have been killed and injured in indiscriminate attacks,” she says.

PRESS RELEASE: More children killed in Idlib in last four weeks than all of 2018

“The current situation in Idlib is a nightmare. The injuries we are seeing are horrific."

At least 33 children have been killed since June 24, compared to 31 children killed during all of 2018, according to the organisation.

Aid agencies are struggling to reach the battered zones and there's a shortage of food, water, medical aid and essential supplies.

“The children of northwest Syria have been caught in violent conflict for 80 days with no lull. They have been denied education, food, and health care, and forced to sleep under the trees in open fields for months now,” Khush added.

Attacks on educational institutions continue unabated and children have missed years of education.

Almost 2.1 million children are out of school and 1.3 million are at risk of dropping out across Syria. 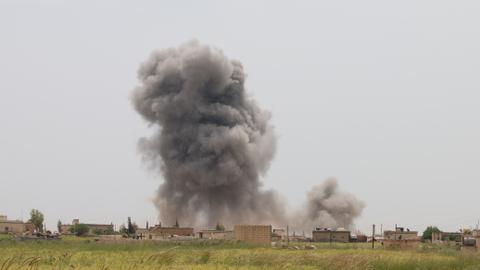