The social media giant's recent move to verify the Twitter account of the YPG/PYD terror group's leader puts the company's policy on terrorism under the spotlight.

In light of its policy of marking ‘hateful content’, Twitter previously blocked and suspended tweets and accounts of some politicians and leaders, including, most recently, the US President Donald Trump.

But when it comes to groups like the PKK, Daesh and Al Qaeda, Twitter turns a blind eye and allows them to incite masses with their hateful content, which unabashedly glorifies violence.

In yet another violation of its own social media policy, Twitter has provided the blue badge to the leaders of the PYD, a terrorist affiliate of the YPG and PKK in the eyes of Turkey.

In 2016, American Defence Chief Ash Carter clearly admitted that the PYD and YPG are linked to the PKK, an armed Marxist-Leninist group listed as a terrorist organisation by Turkey, the US, the EU and NATO.

When asked by Senator Lindsey Graham whether the PYD and its military wing, the YPG, are aligned with the outlawed PKK terror group during his testimony before a Senate panel, Carter agreed that the three groups were linked to each other.  Carter also acknowledged that the PKK is designated a terror group by both the US and Turkey.

Talking about Twitter’s attitude towards the leaders of terrorist groups, Omer Celik told reporters on Thursday that while Twitter does not provide blue badges to Turkish Cypriot leaders, it does so for PYD terrorist leaders, referring to one of the PKK terrorist group's Syrian branches.

"On what basis can you pretend like not recognising the Turkish Republic of Northern Cyprus (TRNC)? You are not the United Nations, the European Union, or any state. Why do you allow terrorist propaganda by providing a blue badge to the PYD terror group leader, Mazloum Kobani? Therefore, these platforms must be objectively regulated. The sovereignty over data and matter of sharing data is an issue of national sovereignty," he said.

When Twitter and Facebook were in their infancy but showed great promise, they both promised to remain committed to providing platforms for constructive debates, where the opposing sides could try to resolve their issues.

But quite the opposite appears to be happening. Several terrorist groups and their leaders have exploited them to further their dark ideologies that encourage the very opposite of debate.

Mazloum Abdi, the leader of the SDF, owns a blue-ticked Twitter account. This means Abdi has a verified account, a privilege granted by Twitter to world leaders, public servants, social media influencers, journalists and celebrities.

SDF draws most of its strength from the YPG, which is the Syrian wing of the PKK.

Mazloum Abdi is in the red category of the Turkish Interior Ministry's wanted list. The wanted list is divided into five colour-coded categories, with red as the most wanted, followed by blue, green, orange and grey.

It is very well-known that Syrian-born Abdi joined the PKK in the 1990s. He participated in the group’s terror campaign against Turkey from the initial days of his recruitment.

The PKK’s four-decade-long terrorism has claimed tens of thousands of lives in Turkey and neighbouring countries, which include children, women and elderly people.

It's not just Abidi, either. Many other PKK members using aliases and code names are active on Twitter and all have the privilege of owning "verified accounts".

Some of them even implicitly threaten civilians, including women. There was one incident where a Turkish teacher, working in a pre-school in one of the eastern provinces, was threatened for simply teaching a dance routine to children holding Turkish flags.

The YPG is the militant wing of the PYD, one of the underground parties established in Syria in 2003 under PKK directives. The PYD has been part of the KCK, which is the umbrella organisation of all the PKK groups across Turkey, Iraq, Iran, Syria and other countries since the official establishment of the group in May 2007 by the PKK leadership.

The existence of terrorist organisations on Twitter is not just limited to the PKK/YPG and PYD terrorist groups.

In 2019, an academic article revealed that some Daesh supporters have persevered in their use of Twitter, using throwaway accounts to share outlinks to pro-Daesh materials on other platforms. The article also showed that 892 outlinks were found in 11,520 tweets that contained the word Rumiyah (Daesh’s online magazine) which freely circulated on Twitter.

Also, the social media giant was quick to censor the contents of TRT World - itself a blue-badge account on Twitter - during Turkey's Operation Peace Spring against YPG/PKK terrorists. 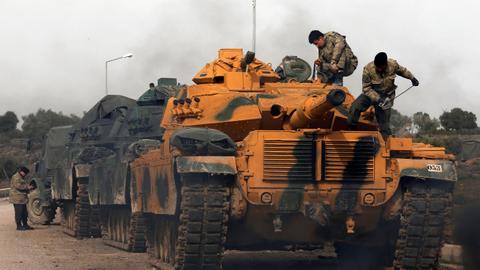