The US president suggested the top Syrian Democratic Forces commander, known by the codename Kobani, as a potential negotiator with Turkey, despite his prominent and longstanding role in a known terrorist organisation.

US President Donald Trump’s letter to the President of Turkey Recep Tayyip Erdogan was widely derided for its stream of consciousness and the unusual tone that discards accepted diplomatic etiquette normally accepted from a national leader.

One thing in the letter stood out in particular. Trump mentioned Mazloum Kobani, a top commander of the Syrian Democratic Forces (SDF), which is led by the YPG, the Syrian wing of the PKK terrorist organisation, as a potential negotiating partner for Turkey.

The PKK is recognised as a terrorist organisation by the EU, US and Turkey and is responsible for more than 40,000 deaths during its campaign of violence in Turkey.

“General Mazloum is willing to negotiate with you, and he is willing to make concessions that they would never have made in the past. I am confidentially enclosing a copy of his letter to me, just received,” said Trump.

Erodgan’s reaction, as reported by the BBC, was to throw the letter in the bin.

But who is Mazloum Kobani?

Firstly, ‘Mazloum Kobani’ is a code name that is often used by PKK terrorists. His real name is Ferhad Abdi Sahin. Much of his past it elusive, and his name continues to be a source of dispute and his time in Europe is further clouded in mystery.

Born in Syria, Sahin has experienced several stints in Syrian prisons for his militant work in Assad’s Syria, later moving to Turkey.

Sahin is one of Turkey’s most wanted men and listed by the Turkish Interior Ministry on its red notice. The middle-aged Sahin’s path to Turkey’s most-wanted list began in the mountains of southeastern Turkey where he engaged in militant activity in the rural areas of Semdinli, in Turkey’s Hakkari province, as early as 1996.

In his younger days, Sahin was pictured with Abdullah Ocalan, the founder of the PKK and now serving a lifetime prison sentence in Turkey, swimming on the banks of the Euphrates.

This lifelong ideological and spiritual connection with Ocalan has shaped Sahin’s trajectory up the ranks of the PKK and later its Syrian affiliate, the YPG.

The YPG was founded in 2004 and it was during this period that Sahin was also promoted to the highest echelons of the newfound militant group.

Sahin’s big break and international prominence began in 2014 when he met the Americans shortly after Daesh declared its so-called caliphate. The American strategy to work with the YPG and its offshoot, the SDF, which Sahin would lead, against Daesh has proved to be controversial.

Sahin and the thousands of battle-hardened militants he leads may be parting ways with the US but the PKK/YPG militant organisation that he has dedicated his life to will remain. 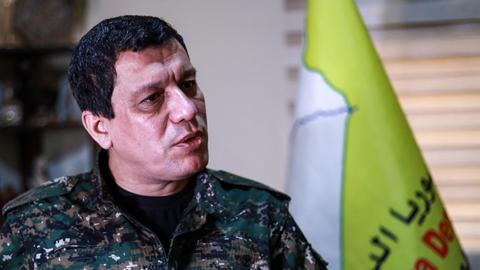