Everything looked just "normal" when HG*, a 55-year-old lady from Germany and her husband reached the snowy mountains of eastern Tyrol. They arrived on March 7, excited to hit the slopes. It was not their first time at the ski resort in Ischgl, in the Paznuan Valley.

The famous ski hub in the Austrian Alps was busy as usual: hotels and restaurant were packed; ski runs and ski-lifts crowded with people queuing up fitted in bright ski gear.

With the neighbouring villages, Ischgl attracts at least 500,000 tourist each winter, when the peak ski season turns the placid Paznaun Valley into the so-called "Ibiza of the Alps" for its renewed nightlife made of apres-ski bars (after-ski bars), concerts and VIP visitors.

Just days later though, Ischgl emerged as Austria's (and Europe) primary coronavirus vector of mass infection after hundreds of cases were traced back to the popular ski resort.

"We knew there were coronavirus cases in South Tyrol (Italy), but we felt safe in Ischgl because we didn't know about any case in the area. On March 8 we went for dinner in a 4-star hotel with another couple. Three of us were later found positive for corona, it seems we got infected on that evening," says HG, who spoke to TRT World over the phone from her home near Dortmund, where she is slowly recovering from days of high fever and shortness of breath.

In the early days of March, authorities in Tyrol were first informed about tourists from Iceland who had returned from Ischgl and tested positive for coronavirus.

But somehow, they played down the risk. "It is improbable that the infections occurred in Tyrol," local health official, Franz Katzgraber, said in a statement.

Austrian authorities instead suggested it was more likely that the Icelanders were infected on the return plane by another passenger who had been to Italy, Europe's Covid-19 epicentre.

Several similar reports of infections among Ischgl tourists arrived from other countries in those days. Authorities treated the reports with discretion.

On the same day that HG reached Ischgl, a German bartender with symptoms tested positive to the swab. The place where he worked - the popular Kitzloch - was shut down on March 9, after 15 more people he had been in contact with, were found to be positive. He is believed to be "patient-zero" at the ski resort.

Tourists were reportedly not informed by hotel staff about the outbreak. Many believe the situation was deliberately played down in an attempt to preserve the season and the industry revolving around it.

Business continued as usual for another week before Ischgl, the Paznaun Valley and other popular and busy localities were finally locked down on March 13.

Local authorities stand accused of reacting late to the outbreak in Tyrol contributing to the spread of the virus in Germany, Denmark, Iceland, Sweden, Norway, and beyond.

"After a few days, apres-ski bars were shut down, restaurants started counting customers coming in, the cable car allowed inside only half of the people as usual, but no one warned us. The situation was very bizarre, so we finally decided to leave earlier than planned, we did not feel safe," recalls HG, "we had a sixth sense and left in time."

When she returned to Germany on March 12, she started feeling mild symptoms and three days later tested positive for Covid-19.

HG is among the 4,000 victims infected in the Tyrolian skiers' paradise who filed complaints against Austrian authorities for their tardy response. The infected tourists are from all over Europe, yet 90 percent of the reported cases are from Germany.

The day after HG and her husband left, Ischgl was shut down, and restrictions were later imposed in the entire province - the first in Austria to enforce such measures.

The Verbraucherschutzverein (VSV), an independent Consumer Protection Association based in Vienna, launched an online call to reach out to all the tourists who visited the Paznaun Valley in those days and got infected with coronavirus.

In ten days, some 4,000 responses poured in — all people who tested positive after holidaying in Ischgl. Among them, 14 are in the intensive care unit, and three have died.

On March 24, the VSV filed a case against the governor of Tyrol, Gunther Platter, his provincial counsellors for Health and Medical Services, two local mayors, and the powerful and influential ski lift companies on the grounds of suspected public endangerment, the spread of notifiable diseases, and abuse of office. Local authorities have repeatedly rejected the charges.

"It is not a class action," points out Dr Peter Kolba, founder and president of VSV, "it is a collection of complaints from victims, a plea to the public prosecutor in Innsbruck (capital of Tyrol) to examine these cases and ascertain whether the authorities knew and did not react in time. In the future, it will possibly become a class action, a claim for damages against the Republic of Austria."

The global coronavirus pandemic qualifies as force majeure, and nobody can be held responsible for any damage suffered. However, keeping ski resorts open, even though authorities knew or should have known of a threat of mass infection, is undoubtedly a reason to consider claims for damages, it reads on the VSV webpage. According to a rough estimation, the cumulative damage could amount to more than $5.4 million.

The Public Prosecutor's Office in Vienna had started investigations though not (yet) against any persons as it argued that media reports would not trigger investigations by themselves. "This is nonsense," says the jurist from Vienna, "this case is a so-called ex-officio offence that requires public prosecution even if the information is received only from the media."

Despite several warnings in the early days about corona-related issues in Ischgl, authorities in Tyrol insisted everything was fine and delayed measures until they couldn't hold on any longer, probably out of fear that it would massively impact businesses.

Tourism in Tyrol generates a yearly turnover of a little over $9 billion - the entire province's economy depends on it. Tyrol alone amounts to about 40 percent of Austria's tourism income with one-third of the country's tourist beds, which means revenues from industries tied to skiing are too significant to close overnight.

"Tourism is as important for Tyrol as it is for some seaside resorts on the Turkish Riviera, over 40 million overnight stays per year, a large part in winter," political activist and blogger, Markus Wilhelm, tells TRT World from the Tyrolean tourist hub of Solden.

"It is a lucrative business that employs many people, also from abroad."

According to the blogger, large cable-car owners have a major influence on politics. Lift owners have sponsored the election campaigns of the Austrian People's Party (OVP), that has ruled Tyrol since 1945. Lift operators and the hotel industry were reluctant to close, but in the end, a compromise was reached with the tourism lobby.

"The season did not end immediately," continues Wilhelm, "but only a few days later. In the meantime, of course, many more people were infected."

At one point, Ischgl's patient-zero was identified in a Swiss waitress – also at Kitzloch bar and restaurant, whose wild nightlife acted as an incubator - who reportedly fell sick with flu-like symptoms on February 5.

In a press conference, last April 2, the head of the human medicine division of the Austrian health agency AGES (Agentur fur Gesundheit und Ernahrungssicherheit) Franz Allerberger, said that the Swiss woman had tested positive more than a month after a mild illness, on March 9.

It would mean that the virus had been around Ischgl, undetected, for more than a month spreading from customer to customer – another storm for the local administration, already accused of having concealed the first cases. Later on, Health Minister Rudolf Anschober (Grune) retreated and affirmed the date had been miswritten.

The woman apparently fell sick on March 5, not February, as previously stated. The first positive test, or Ischgl's patient-zero, then should be Kitzloch's bartender.

The first cases of coronavirus in Austria were also detected in Tyrol, back on February 25: two Italian tourists from Lombardy. However, the ski hub is now considered Austria's central cluster with 611 infections nationally – and many more internationally - traced back to Ischgl. Tyrol accounts for one-quarter of the country's infected. At the time of writing the number of confirmed cases has reached 12,051 in Austria, of which 204 have died.

The city's Mayor Werner Kurz reiterated that there was no wrongdoing on his administration's part by claiming that the local government acted in time and according to the best knowledge of experts at that time.

"What made me really mad was the mayor saying they did everything correct, not any mistake. They withheld that people were infected, causing the disease to spread further," says HG.

"The truth is slowly coming out: they played with the health of many people. It seems that business came before people's health, and this makes me really upset."

*Source did not want to be named

Maria Tavernini is an independent journalist based in India from where she contributes to Altreconomia, Q Code Magazine, Narratively and Al Jazeera. She writes about human rights, social and gender issues in the larger frame of social and political change. 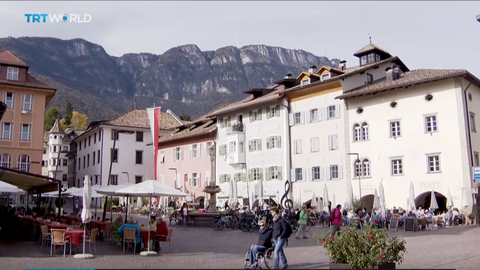