What are the best political scenarios emerging from the Iraq elections?

Without Muqtada al Sadr, Iraq's kingmaker, no coalition government can be formed, experts say. And if it is formed, Sunni bloc’s Halbousi and Kurdish leader Barzani are likely to be in the new government.

Iraq’s firebrand Shia leader Muqtada al Sadr has achieved quite a feat by gaining significant ground after the October 10 vote. Many analysts think he won the elections because of his anti-Iran stances, which undermined pro-Tehran Shia blocs’ reach across Iraq.

But establishing a government in Iraq has almost always been a difficult task. The country's electorate is divided along ethnic and sectarian lines, preventing a single party from winning a majority vote.

Following the 2010 polls, Iraq is on the verge of having a new government after eight months of protracted negotiations.

With Sadr, Halbousi and Barzani leading each bloc, they have significantly increased their share of seats in the parliament, according to initial results. But they are still short of a majority and need the support of other winning candidates in order to form Iraq’s next government.

Some think the fourth partner could be Nouri Maliki, State of Law Alliance leader, whose group emerged as the second biggest bloc from the elections. But Ihsan finds that possibility a far-fetched bid.

“No way! Maliki and Sadr will not work together at all,” the professor tells TRT World. In the past, Ihsan played prominent roles from being President of the General Board for Disputed Areas in Iraq from 2011 to 2015 to leading reconciliation efforts between Baghdad and Erbil.

He thinks that small parties and minority members might join Sadr, Halbousi and Barzani to form the Iraqi government. However, Ihsan finds the possibility of a unity government, which happened in Iraq after the US invasion, not as a good option because it keeps everything in the same structure, preventing any political transformation.

A similar view was shared by Ali Mehdi, a member of Iraqi Turkmen Front’s executive board. “It is certain that Barzani will be in the next government. Halbousi representing Sunnis will also be in the government with one hundred percent certainty. But it’s not clear with whom Sadr will agree to form the government,” Mehdi tells TRT World.

Since the US invasion, which was instrumental to bring Shia groups in power in Iraq, among other political competitions, the power struggle between the two Shia leaders, Sadr and Maliki, have shaped the country’s government formation more than other factors.

When Maliki was prime minister, he conducted security operations in Baghdad’s Sadr City against Sadr supporters, and ever since the two leaders have been at odds with each other.

“The next Iraqi government will be set by how Sadr and Maliki agree or disagree with each other,” says Mehdi, a Turkmen politician from Kirkuk, a disputed region between Turkmen, Arabs and Kurds.

In Iraq, where sectarian and ethnic concerns generally prioritise national causes, everything -- even a Sadr-Maliki agreement -- is possible, provided their political interests are not harmed by the next government formation, according to Mehdi. “In Iraq, governments are formed primarily according to party interests not national interests,” Mehdi notes.

“After a government is formed in Iraq, ministries and other state institutions are usually distributed to different parties according to their own political interests. There is no party which prioritises national interests,” Mehdi says.

“In the end, without Sadr there is no way a government could be formed in Iraq”.

Other experts also have similar thoughts on Sadr’s participation in the government.

“In Iraq, the biggest bloc has a mandate to seek to form a government. As a result, Sadr’s bloc will probably get that mandate,” says Mehmet Alaca, an expert on Iran’s Shia proxies. Like Ihsan, Alaca also thinks that the trio (Sadr, Halbousi and Barzani) will form a government with the help of small factions.

Maliki also demands forming the government, says Alaca, who had been in Baghdad during the election as a poll observer. But he has many problems from the country’s Great Ayatollah Ali al Sistani’s opposition to his leadership to the former prime minister’s infamous corrupt conduct during his rule, Alaca tells TRT World.

As a result, Maliki’s possible bid to form the government could push the country back to a vicious circle, triggering popular protests like the ones Iraqis saw in 2019, according to Alaca.

“Sadr will not form a government with Maliki,” Alaca says, making a strong assumption and citing Sadr’s unflinching refusal to make peace with Maliki. But the worst scenario could emerge if Sadr, who has high expectations like nominating the country’s next prime minister, is excluded from a government formation led by Maliki, Alaca says.

“If Sadr opposes a Maliki-led government, it will lock the political system,” Alaca says.

A Maliki-led government will be backed by pro-Iran factions with connections to armed groups like Hashd al Shaabe, according to the political analyst. That kind of government or its possibility might increase tensions, experts say.

According to Mehmet Bulovali, an Iraqi-Kurdish political analyst, Tehran will insist on Maliki’s participation in the future Iraqi government to keep its influence intact in Baghdad.

Some Shia political parties linked to armed groups like Hashd al Shaabe are not “happy” about the election results, says Ihsan, the Iraqi Kurdish political scientist. Some pro-Iran factions have already denounced preliminary election results as ‘scam’. “They were dreaming to get more,” Ihsan says.

“If they maintain their unhappy attitudes, I think we will enter a chaotic period again,” the professor says, as different Shia groups will possibly clash with each other in a power struggle. “They are already not happy with each other,” he says.

Sadr believes that he represents the Iraqi Shia cause and other leaders like Maliki also have the same thinking, indicating a potential clash point, according to Ihsan. Tehran is also uncharacteristically silent toward the election results.

“You have to consider that there is not an official response [from Iran] to the election,” says Fatima Karimkhan, a Tehran-based Iranian journalist. But she believes eventually Tehran will accept the results.

“But it is very much clear that some hardliners are not happy with the results!” Karimkhan tells TRT World. She also points out that Sadr’s statements against pro-Iran factions and their relations with armed groups do not make those hardliners happy.

“Right now some hardliners are speaking about the possibility of fraud in the election, which is just to excuse themselves about the [unsatisfying] results,” she says. But Karimkhan still believes that “Iran will remain one of the most important players in Iraq” due to its 1600 km border and the country’s huge Shia population.

“Iran's role in Iraq might face some threats for a while, but it would not last for a long time,” she adds.

Iranians lost much in the elections, Ihsan says. “But they can still play a great role because even Iraqi Sunnis are following Iran and some Kurdish groups like the PUK (Patriotic Union of Kurdistan) are totally pro-Iran.” 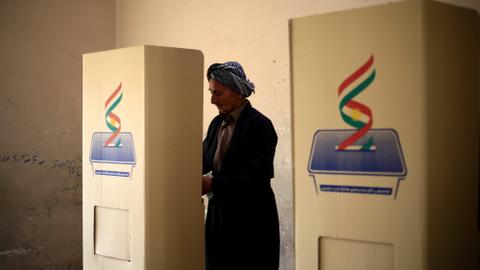