From charismatic candidates on the far-left and far-right, to those plagued either by links to unpopular big parties and even corruption allegations, France's presidential hopefuls are an interesting bunch.

PARIS — France's presidential race is set to be one of the tightest in years, with an array of colourful candidates from across the political spectrum.

The election has serious implications not only for France, but also the European Union as a whole, with the candidates offering starkly different vision of the union.

The independent centrist Emmanuel Macron is the current frontrunner for the second round of voting, but with a high level of abstentions likely, predictions are hard to make, and any of the candidates could emerge victorious.

We take a look at the top five contenders:

Against Le Pen's vision of France as a "fortress," Macron pitches an open, pro-EU, multicultural and global France. He offers a platform likely to appeal to millions of urban voters in France's affluent big cities. Macron packages economic reform with promises to reinvigorate the European Union project, with a dynamic France at its heart.

Macron is running as leader of his own movement "En Marche," and is without the backing of a party machine. He lit up the campaign's early days with his youth and energy. Recent polls suggest a loss of momentum with questions over his lack of experience and policies. His time as a high-earning banker, and his privileged social background may damage his chances with those seeking an outsider.

Marine Le Pen is the leader of France's far-right National Front. Most polls predict she will get through the first round to fight a two-way race to become France's next president. She promises a crackdown on immigration, a referendum on France's membership of the EU and the re-introduction of the French Franc. A win for her would shake the European political status quo and rattle international markets.

Her success has been to widen the appeal of the once-toxic political brand she inherited from her father, viewed as more of an overt hardliner. However well she does, many people will be voting for her for the first time. Le Pen skillfully crafts a populism which highlights the perceived injustices of globalisation, combined with an inward-looking, romantic notion of French identity. She is attracting new voters from the left and right of the political spectrum. Her critics warn the new packaging cannot hide the racism and blunt-edged nationalism of the past, which still lurks beneath the surface of her rhetoric.

The conservative candidate started as the favourite, but was dogged by accusations of corruption and is now undergoing a formal police investigation. The "Penelopegate" scandal involves allegations that he paid his wife to be his assistant, when in reality she stayed at home and did no work at all. Many are surprised he is still even in the race. But the man, who has been compared with Britain's Margaret Thatcher, has managed to retain a solid core of support in the country's conservative and Catholic heartland in spite of the controversy.

Fillon is promising a free market liberalisation of the French economy. He wants to cut the mighty public sector and civil service jobs — something no French politician has dared to do. He wants to make it easier for businesses to take on new staff. He is sceptical of EU economic influence and is competing with Marine Le Pen on the key battleground issues of immigration and national identity.

The 65-year-old socialist veteran is the surprise package of this campaign. A familiar face on France's far-left, he is endorsed by the communist party and promises radical tax and spend policies. The polls have tracked his widening appeal. His passionate rhetoric during the presidential TV debates has forged a loyal following. His progress into the second round cannot be ruled out.

Melenchon, like Le Pen, is fiercely anti-EU, accusing it of neoliberalism. He is equally wary of German influence, which he views as being of an "imperialist" nature. He wants France to withdraw from NATO, and to kick start France's economy with a massive spending programme funded by borrowing. He has proposed 100 percent tax rates for people earning over $400,000 a year, an increase in social welfare, and a further reduction in the French working week. He uses holograms at election rallies and social media to reach his core support base directly, arguing that the mainstream media's coverage of his campaign is biased.

Benoit Hamon is the candidate of France's Socialist Party, the party of outgoing President Francis Hollande. He is from the centre left, and some if his policies overlap with those of Melenchon. As the campaign has developed, he has seen his polling numbers slipping away. His chances of making it to the second round are slim.

He has proposed taxes on robots, the establishment of a basic monthly wage, and a super tax on the banks. But his campaign has floundered. Centrists from the Socialist Party see him as too extreme, and they have vouched support for the independent Emmanuel Macron instead. Those on the left have also drifted away, favouring the greater energy and charisma of Melenchon. Hamon is also victim of the wider mistrust of big party politics — his association with Hollande has hardly helped — and the increasing enthusiasm for insurgent politicians. Simon McGregor-Wood is a correspondent for TRT World, and covers the UK and Europe. 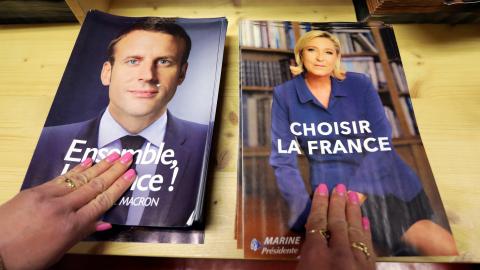