Yemenis are returning to the port city of Hudaida in large numbers despite ongoing fighting there in breach of a United Nations peace deal, humanitarians in the war-ravaged country told TRT World.

Suze van Meegen, an aid worker with the Norwegian Refugee Council, based in the capital, Sanaa, said civilians were being driven back by cold nighttime temperatures in the elevated areas outside Hudaida and faith in last month’s UN-brokered peace deal.

“Huge numbers of civilians have been going back to Hudaida, and it’s fairly early for this to be taking place,” van Meegen, a protection and advocacy adviser, told TRT World.

“People feel inclined to go back early because they don’t feel warm. We’re surprised at the number of people going back, and at the mood of optimism of the people that the agreement will hold in Hudaida.”

Skirmishes between rebel Houthi forces and those linked to the Saudi-backed government continue in the strategic Red Sea port city despite a ceasefire agreement reached in Stockholm on December 13.

Also, the Houthis are not withdrawing their forces from the city ahead of the UN Security Council’s 21-day redeployment deadline, which expires on Tuesday, with both sides rowing over the terms of the agreement.

“There is talk of this redeployment but, while this is ongoing, there are also reinforcements being sent in. So both parties to the conflict are upholding the spirit of the agreement but also preparing themselves in anticipation of the other party breaking it,” said van Meegen.

UN envoy Martin Griffiths visited Sanaa and Hudaida over the weekend in an effort to make the Stockholm agreement stick and to encourage the Houthis to hand over control of the ports of Hudaida, Saleef and Ras Isa.

On Monday, he headed to Riyadh for talks with Yemeni President Abd-Rabbu Mansour Hadi.

UN spokesman Stephane Dujarric described reports of “some people” returning to Hudaida and said that Griffiths was “neck deep” in talks with the warring parties to ensure the city is safe for civilians.

“We very much hope that all the parties involved will respect the agreement and obviously Mr Griffiths’ stay in Yemen and now his trip to Saudi Arabia, where he will meet with President Hadi, is a big part of reinforcing the work that was done in Stockholm,” Dujarric told TRT World.

The agreement, the first significant breakthrough in peace efforts in five years, was part of confidence-building measures intended to pave the way for a wider truce and a framework for political negotiations.

Both sides have been accused of violating the ceasefire deal over Hudaida, with the sound of missiles and automatic gunfire a near-daily occurrence for the thousands of civilians who still reside in the city.

Under the deal, international monitors are to be deployed in Hudaida and a Redeployment Coordination Committee (RCC) including both sides, chaired by Retired Dutch general Patrick Cammaert, will oversee implementation.

“It is critical that the parties, through the RCC, immediately formulate an effective monitoring mechanism to supervise the ceasefire and the redeployment of forces against agreed specifications,” UN spokesman Farhan Haq told TRT World.

“In particular, for redeployment to be successful and credible, it must be a fully verifiable exercise by both parties and the United Nations.”

Van Meegen praised the milestone reached in Sweden and noted the importance of securing Hudaida to facilitate aid imports, but warned that fighting continued across parts of Yemen not covered by the deal.

“The Hudaida ceasefire has been represented a solution and it’s a huge step forward. What we have seen and fear is that, even if this holds, there will be escalations in other parts of the country,” van Meegen told TRT World.

“In recent weeks, we’ve seen dramatic escalation in Marib, an oil- and resource-rich governorate close to Sanaa. We don't want this agreement to give license to parties to the conflict to escalate conflict that will affect people elsewhere.”

Her concerns were echoed by Dina el-Mamoun, Oxfam’s Sanaa-based policy and advocacy director, who said: “Despite the ceasefire, fighting has gone on not only in Hudaida port and city, and in the rest of the country fighting is continuing as usual.”

Yemen has been wracked by violence since 2014 when the Houthis stormed south from their stronghold of Saada and overran swathes of the country, including the capital Sanaa where they toppled Hadi's government.

The conflict escalated in 2015 when Saudi Arabia and the UAE, who accuse the Houthis of being Iranian proxies, launched a military coalition that began air attacks against Houthi positions in a bid to reinstate Hadi.

Is there finally hope for peace in Yemen? 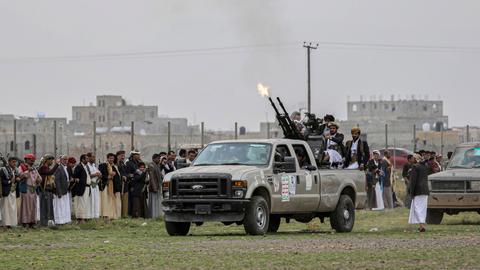