Civilians greet and show hospitality to Turkish soldiers and the Free Syrian Army members after they cleared the YPG terror group from the Afrin town centre on Sunday.

Civilians waved to the Turkish and FSA troops and chanted slogans in their support.

Many drove their cars to the town centre where they gathered and honked to celebrate the victory.

Anadolu Agency correspondents in the region saw several buildings and vehicles which had been set ablaze by terrorists.

After taking control, Turkish soldiers and FSA fighters destroyed photos and rags left behind by the PKK-affiliated YPG.

Security forces are searching houses to capture any terrorists who are hiding among civilians.

Turkey on January 20 launched Operation Olive Branch to remove the YPG and Daesh terrorists from Afrin.

According to the Turkish General Staff, the operation aims to establish security and stability along Turkey's borders and the region as well as protect Syrians from terrorist cruelty and oppression.

The operation is being carried out under the framework of Turkey’s rights based on international law, UN Security Council resolutions, its self-defense rights under the UN charter, and respect for Syria's territorial integrity, it said.

The military has also said that only terrorist targets are being destroyed and "utmost care" is being taken to avoid harming any civilians.

Afrin has been a major hideout for the YPG - the Syrian branch of PKK - since July 2012, when the Assad regime in Syria left the city to the terror group without a fight. 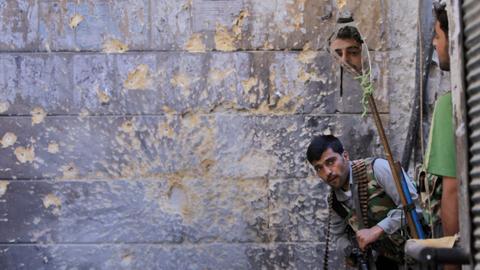