Lebanon is battling an economic meltdown dubbed by the World Bank as one of the deepest depressions in modern history.

Sisi welcomed Hariri on Wednesday, "reaffirming Egypt's full support for Hariri's political path which aims at restoring stability to Lebanon", and for his attempts to deal with challenges including the formation of a government, a presidency statement said.

Lebanon is battling an economic meltdown dubbed by the World Bank as one of the deepest depressions in modern history.

The financial crisis, that has propelled more than half of the population into poverty and seen the value of the currency drop by more than 90 percent in nearly two years, has been deepened by political deadlock.

Hariri has been at loggerheads for months with President Michel Aoun over forming a new government.

He is due to meet Aoun at the Baabda presidential palace on his return from Cairo.

Earlier on Wednesday, Aoun said he hoped he hoped Hariri would carry "positive indications" to the meeting, and said efforts were still under way to form a cabinet.

Egypt asked Hariri not to give up on forming a cabinet, regional television station Al Hadath said on Wednesday, citing its sources.

The network also said that Cairo would send a high level delegation to Beirut soon to support efforts to name a government and that it would work on a roadmap to resolving the Lebanese crisis.

The protests, called for by relatives of the victims of the August 4 blast, swelled by the evening, with dozens of demonstrators streaming in to join families storming Fahmi's heavily guarded Beirut home.

The angry crowd, demanding accountability as the anniversary approaches of Lebanon's worst peace-time disaster, were pushed back by riot police who swung batons and fired tear gas to disperse them.

The detonation of a huge stockpile of fertiliser at the port last summer killed more than 200 people and wrecked huge swathes of the capital.

An investigation launched in the wake of the tragedy has yet to hold any officials to account. 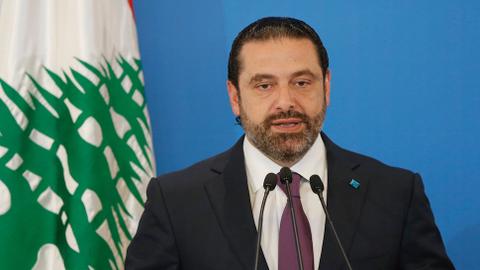