G20 nations will consider extending debt relief for coronavirus-hit poor countries in the second half of 2020, the group's finance ministers and central bankers have said after talks aimed at spurring global economic recovery.

The 20 most industrialised nations announced a one-year debt standstill for the world's poorest nations in April, but campaigners have criticised the measure as grossly inadequate to stave off the knock-on effects of the pandemic.

World Bank president David Malpass on Saturday called for the debt suspension initiative to be extended through the end of 2021, while multiple charities including Oxfam said it needs to be stretched through 2022 to avert a "catastrophe for hundreds of millions of people".

"We are determined to continue to use all available policy tools to safeguard people’s lives, jobs and incomes, support global economic recovery, and enhance the resilience of the financial system, while safeguarding against downside risks," they said in statement after the meeting ended.

Sweeping shutdowns aimed at halting the spread of the disease have caused massive disruption to the global economy, and are hitting the world's poorest countries hardest.

G20 finance officials said 42 of the world's 73 poorest countries had requested a freeze in official bilateral debt payments through the end of the year, amounting to about $5.3 billion in deferred payments.

In their final statement after the virtual talks hosted by Riyadh, G20 ministers and bankers said they would "consider a possible extension of the (debt suspension initiative) in the second half of 2020."

Any extension of the initiative will be based on how the pandemic develops and recommendations of the International Monetary Fund and World Bank that will be submitted to G20 members in advance of their meeting in October, it added.

Downgrading its growth forecasts, the IMF last month said it expected global GDP to fall by 4.9 percent this year due to a deeper contraction during lockdowns than previously anticipated.

"Due to the continuing impact of the Covid-19 pandemic, the global economy faces a deep recession this year, with partial and uneven recovery expected in 2021," Kristalina Georgieva, the IMF's managing director, said in a statement after the meeting.

"We need to unite to help the poorest and most vulnerable economies, especially those struggling with high debt... The G20's debt service suspension initiative has been commendable and I hope that consideration will be given to extending it."

French Finance Minister Bruno Le Maire voiced optimism that the initiative will be extended, saying G20 states were on track to securing a deal on this "fundamental issue".

Despite the group's initiatives so far, 73 of the world's poorest countries are still required to pay up to $33.7 billion in debt repayments through the end of the year, according to the charities Oxfam, Christian Aid and Global Justice Now.

"The global economy has been hit harder by the coronavirus than the already dire predictions we saw in April — the G20 finance ministers have the mandate to avert an impending catastrophe for hundreds of millions of people," said Chema Vera, Oxfam's interim executive director.

"They must make (the initiative) legally binding to cancel all debt payments, including private and multilateral, through the end of 2022 and also include middle-income countries," he added.

Amnesty International also called on G20 nations to "cancel the debt owed by the poorest countries for at least the next two years".

"If we are to build resilience to future crises, we need to make long-term structural changes that will require courage and leadership from G20 countries."

Earlier this week, the IMF's Georgieva said around $11 trillion in stimulus measures offered by many countries, including the G20, have "put a floor under the global economy".

But as pressure mounts to do more, G20 nations are themselves scrambling to defend their virus-wracked economies amid forecasts of a deepening recession.

Last month, the Organisation for Economic Co-operation and Development (OECD) said measures to curtail the disease caused a record 3.4 percent drop in GDP for G20 economies in the first three months of 2020.

That marks the biggest decline since the Paris-based agency began compiling data in 1998.

Turkey in 'talks with UN' for Khashoggi probe 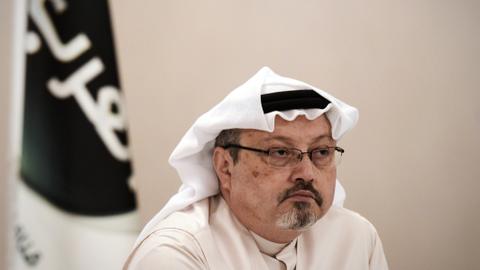