The UN Human Rights Council is discussing a broad, international investigation into violations in the latest Israeli attacks on besieged Gaza, but also of "systematic" abuses in the Palestinian territories and inside Israel.

Bachelet, opening a special session of the UN Human Rights Council on Thursday, called at the request of Muslim countries, said she had seen no evidence that civilian buildings in Gaza hit by Israeli strikes were being used by for military purposes.

"If found disproportionate, such attacks might constitute war crimes," she told the 47-member Geneva forum.

Before a ceasefire took hold last Friday, Israeli air strikes and artillery fire on Gaza killed 254 Palestinians and wounded more than 1,900 people in 11 days of assault.

The UN Human Rights Council is to discuss creating a broad, international investigation into violations in the latest Israeli attacks on besieged Gaza, but also of "systematic" abuses in the Palestinian territories and inside Israel.

"There is no doubt that Israel has the right to defend its citizens and residents," she said. "However, Palestinians have rights too. The same rights."

The proposal before the United Nations' top rights body calls for an unprecedented level of scrutiny on abuses and their "root causes" in the decades-long occupation.

The draft resolution presented by the Organization of Islamic Cooperation will be debated during a special one-day council session focused on the surge in deadly violence between Israelis and Palestinians this month.

The session of the 47-member council, called for by Pakistan on behalf of the OIC and the Palestinian Authority, kicked off at on Thursday with a statement by Bachelet.

Palestinian foreign minister Riyad al Maliki was among those expected to address the session, as was Meirav Eilon Shahar, Israel's ambassador to the UN in Geneva.

The text, expected to be voted on Thursday afternoon, calls for the council to "urgently establish an ongoing independent, international commission of inquiry... in the Occupied Palestinian Territory, including East Jerusalem and in Israel".

The investigators, the text said, should probe "all alleged violations and abuses" of international law linked to the tensions that sparked the latest violence.

But the draft text goes far beyond the most recent conflict, also calling for investigators to probe "underlying root causes of recurrent tensions and instability, including systematic discrimination and repression based on group identity".

The investigation should focus on establishing facts and gather evidence and other material that could be used in legal proceedings, and as far as possible should identify perpetrators to ensure they are held accountable, it said.

Rocket and other fire from Gaza claimed 12 lives in Israel, including one child and a Palestinian teenager, an Israeli soldier, one Indian national and two Thai workers, medics say. Some 357 people in Israel were wounded.

On Wednesday, Shahar attacked both the session and the draft resolution.

Their "sole purpose", she said, was "to blame Israel, whitewash the crimes committed by Hamas, and for the Palestinian Authority to avoid assuming its responsibilities towards its own population".

Israel's attacks on Gaza were overtly against its government of Hamas. However, as confirmed by a Hamas leader in Gaza, some 174 Palestinians killed in Israeli bombardment were non-combatants, civilians, including 66 children, 39 women and 17 people above the age of 60.

Hamas said 80 fighters were killed during the 11-day war, providing the group’s first official tally for losses sustained in the fighting.

Gaza’s Health Ministry that has been providing the tally of Palestinians killed in the Israeli offensive did not give a breakdown between civilians and combatants.

Speaking to The Associated Press, Hamas leader Yehiyeh Sinwar said those killed last week included 57 members of his group’s armed wing, 22 members of the smaller Islamic Jihad group and one member of a small group called the Popular Resistance Committees.

Hamas presented a list from the Health Ministry identifying women and children who died.

The oldest was a 90-year-old man, while there were eight children aged 2 or under. The list has not been independently verified, but many of the names were already well known.

"Long-standing and systemic impunity for international law violations has thwarted justice, created a protection crisis and undermined all efforts to achieve a just and peaceful solution," the draft text said.

If the resolution passes, it would create the council's first ever open-ended commission of inquiry (COI) – the highest-level investigation that can be ordered by the council.

Other COIs, like the one on Syria, need their mandates renewed every year.

And while the council has previously ordered eight investigations into rights violations committed in the Palestinian territories, this would be the first one with a mandate to examine "root causes" in the drawn-out conflict, and also to probe systematic abuses committed within Israel.

Twenty of the council's 47 members were among the 66 countries that backed holding the special session.

The rights council holds three regular sessions each year, but can hold special sessions with the backing of at least a third of members.

Thursday will mark the 30th extraordinary meeting since the council's creation 15 years ago.

Turkey denounced remarks of the director of the United Nations Relief and Works Agency for Palestine Refugees (UNRWA) in the Gaza Strip – who in one interview justified the Israeli assault on the blockaded enclave.

“I am not a military expert, but from my point of view there is a high precision in the Israeli army bombing during the past 11 days,” Schmale said earlier. He later apologised for his comments and said they were taken out of context and without the background of his criticism of Israeli aggression.

(2-8) Last 2 weeks were horrific for Gaza & everyone who lives in it. I reiterate my sincere condolences to those who had family members & friends killed. I express my utmost respect & solidarity with my UNRWA colleagues & their families & friends who suffered immense pain & loss https://t.co/RqTIIGS4jP

The statements issued directly by the Agency have pointed out that UNRWA buildings and schools were severely damaged in Israel’s attacks on Gaza, Bilgic said.

“According to UNRWA’s daily status reports on these attacks, 19 of the children who lost their lives were students of UNRWA schools,” he added. 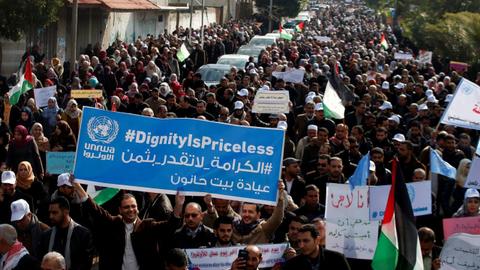