Palestinian Health Ministry says 212 people have been killed so far, including 61 children and 36 women since the start of Israel's attack on blockaded Gaza.

Israel has launched dozens of air strikes in besieged Gaza, targeting agricultural fields, streets and infrastructure in the Palestinian enclave in the latest wave of its aggression that has spilt into a second week.

At least three Palestinians were killed by an Israeli air strike on a car in Gaza on Monday, medics said.

Another Palestinian was killed in an aerial attack on the town of Jabalya, they said.

Israel's air strikes have killed 212 people since the late hours of May 10, including 61 children, with another 1,400 people wounded, according to Gaza Health Ministry. Rocket attacks in Israel have killed 10 people, including one child.

"If the aggression continues we expect conditions to become worse," he said.

He also warned that the territory was running low on fuel and other spare parts.

The UN has warned that Gaza's sole power station is at risk of running out of fuel. The territory already experiences daily power outages of 8 to 12 hours and tap water is undrinkable.

Electricity and water cuts are being experienced in areas near the targeted areas, witnesses added.

Israeli warships deployed in the sea also launched a scathing on Gaza's coast.

"My children couldn't sleep all night even after the wave of intensive bombing stopped," said Umm Naeem, 50, a mother of five, as she shopped for bread in Gaza City after the latest Israeli air strikes.

"What is happening to us is too much, but Jerusalem deserves all the sacrifices."

Meanwhile, Palestinian political party Hamas said its military wing retaliated to the Israeli attacks, firing rockets on the cities of Beersheba and Ashkelon, and also targeting some settlement areas.

Gaza tonight: 80 Israeli airstrikes during the past 30 minutes have targeted government buildings, streets, infrastructures and homes of citizens. #GazaUnderAttackk pic.twitter.com/TwZlesiZFO

In the Israeli air assault early on Sunday that killed 42 people, families were buried under piles of cement rubble and twisted rebar. A yellow canary bird lay crushed on the ground.

Shards of glass and debris-covered streets blocks away from the major downtown thoroughfare where the three buildings were hit over the course of five minutes around 1 am local time.

The hostilities have repeatedly escalated over the past week, marking the worst attacks on the territory since the devastating attacks of 2014.

"I have not seen this level of destruction through my 14 years of work," said Samir al Khatib, an emergency rescue official in Gaza. "Not even in the 2014 war."

Rescuers furiously dug through the rubble using excavators and bulldozers amid clouds of heavy dust. One shouted, "Can you hear me?‚" into a hole.

Palestinian Foreign Minister Riyad al Maliki said more than 10,000 civilians have been displaced in Gaza due to Israeli attacks, at an extraordinary meeting of the Organization of Islamic Cooperation (OIC) on Sunday.

"Ongoing barbaric bombardments on Gaza has led to the displacement of more than 10,000 Palestinian citizens and the destruction of hundreds of homes across the region," he said.

Just now: Israeli bombs land extremely close to al-Shifa hospital in Gaza City. The humming sound is numerous drones directly overhead. Everyone you see could be killed at any second. #GazaUnderAttack pic.twitter.com/muZvWdXbWt

No concrete outcome from UNSC meeting

In New York, UN Secretary General Antonio Guterres told the Security Council that fighting in Israel and Gaza were "utterly appalling" and called for an immediate end to fighting.

However, the top UN body's open debate on the tensions amid the Israel's attacks in Gaza ended with no concrete outcome

This third session of the UN Security Council (UNSC) this week came after the US's two moves to block a joint statement that would condemn Israel for the violence and call for a ceasefire.

On "Face the Nation" programme on US network CBS, Netanyahu defended another Israeli air strike a day earlier that destroyed a 12-storey building where the Associated Press and the Al Jazeera TV network had offices.

He said the structure also housed Hamas' intelligence office and was thus a legitimate target. Israel had given advance warning to occupants to leave.

The Associated Press’ top editor Sally Buzbee, called for an independent investigation into the strike, asking Israel to present evidence that Hamas was in the building.

Separately, media watchdog Reporters Without Borders asked the International Criminal Court to investigate it as a possible war crime.

US envoy Hady Amr, appointed by President Joe Biden last week, met Palestinian officials in the West Bank city of Ramallah on Monday and top diplomat Antony Blinken said US officials had been "working around the clock" to bring an end to the conflict.

The Israeli military said that Hamas and other armed factions have fired more than 3,100 rockets from Gaza over the past week.

Gaza's rockets are mostly repurposed handmade weapons in comparison to Israel's military might which gets over $16 billion for defence spending and $3.8 billion from the US in annual funding.

Hamas said its latest attacks were in retaliation for Israel's ongoing aggression against civilians, including the air strikes on Sunday.

Another flashpoint in recent days has been a court case that could end with Palestinian families expulsion from occupied East Jerusalem homes in Sheikh Jarrah claimed by illegal Jewish settlers.

It annexed and occupied the entire city in 1980 in a move never recognised by the international community. 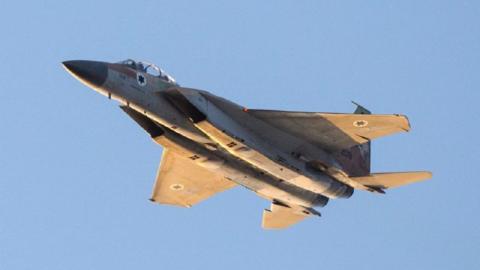