1
Why Lebanese protesters have turned their anger on the banks
2
In pictures: Harsh winter cripples camps near Idlib, Syria
3
How Montenegro’s religious property law is a regional power struggle
4
My time with PMF fighters in Iraq: the proxy wars must stop

A Kashmiri student describes how she feels about her besieged home while thousands of miles away in Turkey.

On the evening of August 4, I missed my mother’s internet call and about two minutes later when I tried calling back, the Indian government had cut all communication lines in the disputed region of India-administered Jammu and Kashmir. Since then, I feel helpless, anxiously reaching out to everyone in my family, neighbourhood and friends even though I know it's futile. I've also sent several text messages, hoping against hope that they may be delivered. Today, I'll write more.

My mother and brother are my only source of information about my aged, ailing father who is in India’s Tihar Jail. They speak to him for five minutes once a week. Since they are under a military curfew in Kashmir, I have no news about my father. My imagination fails me when I think about him and other Kashmiri leaders with him who were arrested two years ago by India's National Investigative Agency. They have been imprisoned without any charges being proven against them. I wonder how my father is holding up in jail. Despite his failing health, he kept our morale high. I hope he has not given up.

It has been 11 days and 10 nights and I have no idea how my mother, my brother and my jailed father are doing.

Thousands of miles away from them in Turkey, everything around me looks normal. But

I feel numb and distracted, unable to connect with my surroundings. Hardly anyone is aware of what's happening in Kashmir. I don't wish to tell them until they ask me. I'm trying my best to focus on my studies and social life, but the thought of Kashmir keeps eating at me.

But this time it feels strange and completely different. Since India transgressed a historic treaty by scrapping Article 370 and 35A on August 5, a law that safeguarded the demography of Kashmir and its neighbouring provinces Jammu and Ladakh, Kashmiris fear that their identity, which is the core of their existence, has been stolen and their future is at risk.

“What would be left of us in the next six months?” asked a friend of mine living outside Kashmir with whom I spoke first after the news. We went silent for nearly two minutes, knowing we both had lost something precious to us.

Kashmir is also enveloped in silence. Days before the Indian parliament passed the resolution ending a key constitutional agreement with the Kashmir region by scrapping the two articles crucial to the Kashmir accession treaty, New Delhi had moved tens of thousands of additional soldiers to ramp up its 500,000-strong military who have been stationed in Kashmir for several decades.

I am no stranger to turmoil. Most of my childhood is marked with Indian army ransacking my home and taking away my father.

With the Kashmir conflict so intricately intertwined with my personal life, I have always carried Kashmir in my heart. My classmates in Turkey have now developed a fair idea of Kashmir as one of the most heavily militarised yet mostly forgotten territories in the world.

Knowing about the nature of the Indian state and the history of its behaviour with Kashmiris, India will always respond to any form of dissent in Kashmir will its military might. The Indian state has never shied away from killing civilian protesters – even those who did not throw stones at them. Armed with sophisticated weaponry and the laws that allow them to kill and detain Kashmiris with impunity, the Indian armed forces have almost always enjoyed nationwide public support. The public perception has almost always favoured the armed forces, even when they were accused of committing serious human rights abuses that can easily qualify as war crimes in Kashmir.

In light of the heavily militarised discourse of Kashmir, which has mainstream public approval in India, it's a difficult choice for a Kashmiri to express her political opinions. And that's precisely why my mother never supported my decision of moving to New Delhi to become a journalist. Her fear was that journalism will expose me to the harsh political realities of our time and I may become emotionally vulnerable while navigating the world.

Being the daughter of a Kashmiri politician who rebelled against India, my mother was aware about the brutal aspect of politics in Kashmir.

“It is not easy to live a life that I have lived. All I ever wished for you was to live a normal life and stay away from all this,” she often told me.

My mother has seen her father spend years in Indian jails. Her husband, my father, was detained on several occasions and he is currently imprisoned without charge.

She has mourned for her cousins and uncles who were killed in the last three decades of Kashmir conflict.

A day before the Indian government cut off Kashmir from the world, I asked my mother about the rumours of impending communication gag in Kashmir. She sounded nervous.

“Our lives would never be the same again," she said. "They [the Indian government] are planning something really big. I am sure whatever it is, it will definitely affect your father’s term in jail. Will he ever come out?” she asked, crying.

I did not have an answer.

For the last 11 days, I have been glued to Twitter, Facebook and other platforms where the news on Kashmir is shared. I am completely preoccupied with Kashmir, reaching out to whoever I can, desperately looking for credible information.

In such depressing times, I sometimes find comfort reading Kashmiri poet Agha Shahid Ali. Whenever it gets too overwhelming, in Shahid's words I tell myself: "Mad heart. Be brave." Ruwa Shah is a student of TV and Cinema in Turkey's Erciyes University. She has previously worked as a journalist in India. 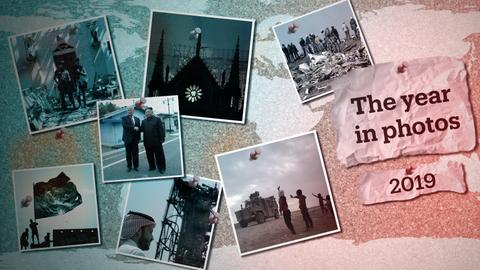 1
Why Lebanese protesters have turned their anger on the banks
2
In pictures: Harsh winter cripples camps near Idlib, Syria
3
How Montenegro’s religious property law is a regional power struggle
4
My time with PMF fighters in Iraq: the proxy wars must stop