It has become one of the most pressing issues in the region and there's no silver bullet to fix it.

An edict published in 1274 stated that “no citizen or inhabitant of the city of Bologna may attempt to take students away from the city with the intention of continuing the studium elsewhere”. Later, the rule was fortified with a death penalty, the medieval way to strike back against the ‘brain drain’ – the migration of highly skilled professionals. Now, a few centuries later, citizens on the other shore of the Adriatic Sea face a similar problem; but how should countries in the modern world tackle ‘brain drain’?

The emigration of young and talented nationals is one of the toughest and most pressing migration problems in the Balkans. At the beginning of 2020, the World Economic Forum’s Global Competitiveness Report painted a dark picture for the region: Globally, Bosnia and Herzegovina, North Macedonia, Serbia, and Croatia ranked amongst the countries most affected by brain drain. Young people have struggled to survive in the home job markets due to inadequate opportunities and low wages. As a result, many have sought better professions and living standards abroad. Furthermore, the Covid-19 pandemic and further collapse of the job market worsened the situation in the region.

According to public opinion survey Balkan Barometer, the three main origins of the phenomenon are rampant unemployment, a weak economy and rampant corruption. A recent report from Transparency International found that two Balkan countries, Bulgaria and Romania, rank the worst among EU states in the anti-corruption chart. The two are followed by Hungary and Balkanian adjoin Croatia.

Currently, Balkan nations have some of the higher unemployment rates among people aged 15-24. World Bank data shows that while unemployment for this demographic in Serbia is 30 percent, North Macedonian rates are at 38 percent, and Bosnia and Herzegovinian unemployment is an alarming 40 percent. Hence, faced with these worrying statistics and aspirations for a better life, a considerable number of people leave their homeland. But where do all these young people go?

In a nutshell, economic emigrants from the Balkans tend to opt for places with higher employment rates, active economic growth, cultural similarity, and high per capita wealth. Logically, Germany is the preferred destination for Balkan nationals. For instance, Macedonians mostly migrate to Germany, Australia, Switzerland, and Turkey. However, that migration is immensely easier for EU member countries. Official governmental resources state 40,000 Croats per year, mostly young people, have left the country since it joined the EU in 2014. The EU passport provides access to a union-wide work permit. As a result, there is a trend of obtaining passports from neighboring EU member countries. For example, 25 percent of Croatian passport holders working abroad are most likely from Bosnia, and the vast majority of Moldovans in the West have Romanian identification.

Oddly enough, emigration also has positive consequences: rising foreign remittances and lower unemployment rates, but these are largely short-term reliefs. Violeta Jovanović, executive director of the National Alliance for Local Economic Development (NALED) , says that Serbia loses 2 billion euros every year due to young people’s emigration. The research published by the Bulgarian Industrial Capital Association estimates a final educational bill of 14 billion euros since 1990. The latter equals 500,000 high school and 300,000 university students who left the country after graduation. This is a bleak statistic considering the country’s population of seven million people. Bosnia and Herzegovina’s media outlets have reported that the government spends 50 million euros per year on future health workers' education, people who often leave after graduation.

Furthermore, countries in the region have begun to face a lack of qualified workers in vital areas. In 2015 Romania’s capital city Bucharest witnessed a catastrophic nightclub fire that resulted in the immediate death of 27 people. The remaining of the total 67 casualties occurred in the medical centre; due to hospital infections and excessively diluted disinfectants. Thus, it is not surprising that in 2019 Romania was ranked the worst health care system in the European Union. The situation in vicinal Serbia is not more optimistic. The average age of doctors in the country is 55 and the number of departing young doctors increases day by day. On the other hand, in Kosovo, they established a school where medical staff train to work in Germany. The low wages and  30 percent youth unemployment rate also has affected that.

To halt this trend, European Committee’s report recommends that the Balkan states better research and fully understand the issue in order to apply new policies and measures to the target demographic. It specifically addresses the need to identify and meet the group's expectations and specify the triggers that send them abroad. In this context, Greece, which has a 32 percent youth unemployment rate, launched the Rebrane Greece at the end of 2019. Supported by the labour ministry, the initiative aims to reverse brain drain symptoms by offering a monthly salary of €3,000 (before tax) for the 500 most accomplished young workers who would like to come back to Greece as part of the project.

To aid this goal, albeit unwillingly, massive reverse migration arose during the pandemic. Approximately 500,000 Bulgarians went back based on a “wish to be with relatives” or “loss of job”. Almost 1.3 million Romanians also returned home. If wisely capitalised on by the home country, this could prompt ‘brain gain’ in the long term.

There are other ongoing challenges for the governments – in Bulgaria, many of the returners contributed to and participated in last summer’s anti-government protests. So, it is not surprising that two-thirds of the returned Bulgarians plan to migrate again. In the past, these young workers prioritised wanting to make ends meet. Now, these people demand better hospitals, quality education and higher living standards—something the region unfortunately cannot provide.

The brain drain challenge has numerous layers – low per capita wealth, meagre wages, no investment in human capital, corruption, etc. Consequently, as there is not just one reason for the brain drain, there is not one solution. That being said, awareness is the first step.

Despite its strict approach, the Bolognese did not succeed in retaining its students and scholars. Perhaps the Balkans will learn from the past and prevent history from repeating itself. 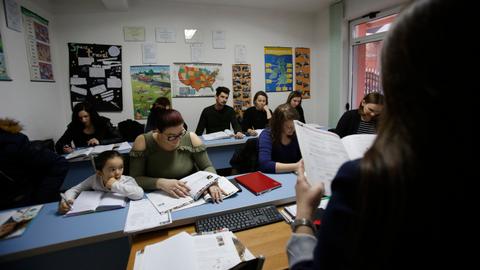