Most victims of such “ritual sacrifices” are children, apparently because they are easier to abduct and seen as “pure” and so of "higher ritual value".

Anadolu Agency quoted authorities as saying on Sunday that the sacrifices are being carried out by witch doctors or local traditional healers, dotting rural areas.

Admitting that human sacrifice is a big problem, Lucas Oweyesigire, the police spokesman for the Kampala region, said most such practices take place in rural areas.

The so-called leader of traditional healing and witch doctors, Mama Fina, has also condemned human sacrifice and described those recommending the sacrifice of human beings as “fake”.

Police spokesman Fred Enanga said only last month they "arrested a man identified as Musilimu Mbwire on suspicion of killing his two sons in human sacrifice.”

According to preliminary investigations, a rich man had paid Mbwire money and convinced him to sacrifice his two sons at the instructions of a witch doctor.

Superstitions lead people in rural areas to seek help from witch doctors, who in turn offer weird prescriptions, including human sacrifices to turn around their luck.

A more worrisome part of the superstition is to undertake human sacrifice to put the body at the foundation of a building to bring good luck.

Timothy Mukasa, a local leader in Kampala’s suburb of Kireka, said many multi-storey buildings in the town have been built on a human body.

“The witch doctors tell owners to put a human body at the foundation of the construction of the buildings,” he said.

In 2014, authorities apprehended and later sentenced a tycoon Kato Kajubi for sacrificing a child and then putting his body in the foundation of a building that he was about to construct.

David Musenze, a journalist who studied psychology, said there are not many qualified counsellors to attend to psychological and mental issues of people, which makes them take advice from witch doctors.

"People go to witch doctors to help them get jobs, be promoted at jobs, or kill their enemies, along with many other problems," he said. 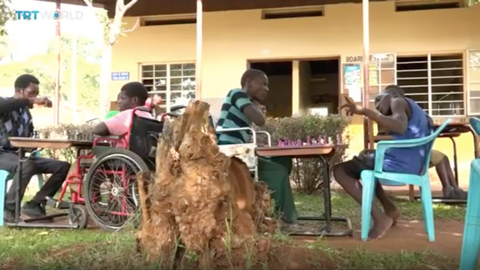