Almost 200 Nigerian migrants were repatriated from South Africa on Wednesday following a wave of xenophobic violence that swept through the country and sparked sharp exchanges between the two countries.

A flight carrying 189 Nigerians landed in Nigeria's commercial capital Lagos, with some of those onboard punching the air and singing their national anthem while waving pictures of burnt shops.

"I ran for my life, they would have killed me," said Samson Aliyu, a clothes seller who lived in South Africa for two years.

"They burnt my shop, everything," he added.

More than 600 Nigerians are expected to return from South Africa this week, the Nigerian government has said.

"We were expecting 317 but from the information we have 189 are on board," said Nigeria's minister for diaspora affairs Abike Dabiri-Erewa.

"There was about a five hour delay courtesy of the South African authorities who actually frustrated this return of Nigerians," she said, blaming authorities in Johannesburg for failing to help Nigerians without travel documents.

"There was a lot of frustration in getting them back home but we're glad that they will be here," she added.

Leading the returnees in singing the national anthem, Dabiri-Erewa promised the government would provide financial support.

Johannesburg and surrounding areas were rocked by a series of deadly attacks on foreigners last week, including many directed against Nigerian-owned businesses and properties.

At least 10 people were killed in the violence and hundreds of shops destroyed while more than 420 people were arrested.

No Nigerians were killed but the violence led to condemnation across Africa, particularly in Nigeria, fuelling diplomatic tensions between the continent's two leading nations.

The violence also prompted reprisal attacks against South African firms in Nigeria and the temporary closing of South Africa's diplomatic missions in Lagos and Abuja. 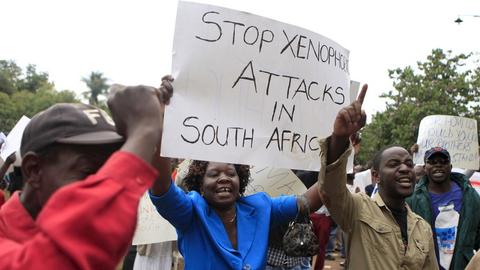 More than 400 Bangladeshis murdered in S Africa in four years

Nigeria to repatriate 600 citizens from South Africa after attacks