The deaths of 12 women travelling to work in an inappropriate vehicle in the village of Sabbela provoked a wave of anger among Tunisians.

About 5,000 Tunisians protested on Monday in central Sidi Bouzid city against marginalisation and deteriorating conditions, two days after the deaths of 12 female rural workers in a traffic accident.

Traffic stopped and schools, hospitals and public offices were closed under a regional strike called by unions in Sidi Bouzid, the birthplace of the Tunisian revolution.

The deaths of 12 women travelling to work in an inappropriate vehicle in the village of Sabbela on Saturday provoked a wave of anger among Tunisians.

Similar incidents have occurred in recent months, fuelling Tunisians anger at the high cost of living, unemployment and the decline of state services since the overthrow of Zine El Abidine Ben Ali in 2011.

'We want justice and dignity'

Protesters, including women and youths, in Sidi Bouzid repeated the slogans of the 2011 revolution – "People want to overthrow the regime. We want justice and dignity. Streets and clashes until the regime falls.”

In December 2010, a young Tunisian vendor named Mohamed Bouazizi set himself alight in a suicide protest over unemployment and marginalisation, spreading revolt across the Arab world.

"This strike is a support for the victims of this tragedy ... we suffer in Sidi Bouzid from marginalisation and very bad conditions," said Mohamed Azhar Gamoudi, an official in the UGTT union.

But political progress has not been matched by economic advances. Unemployment stands at about 15 percent, up from 12 percent in 2010, due to weak growth and low investment. 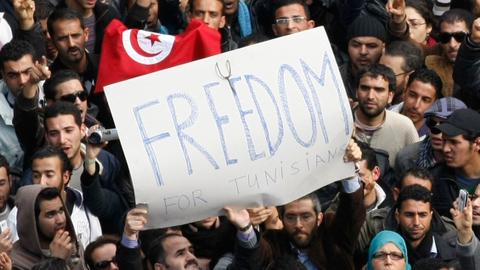