Provisional results for the presidential vote are due to be published by January 6, but the DRC's election commission may have to postpone the results, according to the panel's chairman.

The Democratic Republic of the Congo's election commission may have to postpone publication of provisional results for a long-awaited presidential vote, the panel's chairman said on Thursday.

"We are working around the clock. We are doing our best to publish the results on January 6. But if we can't, we can't," Corneille Nangaa, head of the Independent National Election Commission (CENI), told AFP.

The DRC, sub-Saharan Africa's biggest country and one of its most unstable, has been buffeted by political turbulence for the past two years.

President Joseph Kabila, 47, should have stepped down at the end of 2016 when his constitutionally limited two terms in office expired.

He invoked a caretaker clause in the constitution to stay on but at the cost of protests that his forces ruthlessly crushed, leading to scores of deaths.

After three delays, the election for Kabila's successor was held on Sunday.

This was followed by the marathon task of counting the vote, amid suspicions by the opposition of a rigged outcome.

According to CENI's timetable, provisional results are due to be published by January 6 – a goal that the commission had reaffirmed just on Tuesday.

Definitive results are due to be published on January 15, and the swearing-in of the new president three days later, according to this schedule.

Nangaa said that the big hurdle was compiling results by hand.

Each electoral area counts the vote, issues a report on the tally, and this document together with the ballots cast, is then sent to "result centralisation centres" where the results are compiled.

But the road network in the DRC is notoriously poor.

CENI had installed electronic voting machines as aids to help speed up balloting.

The machines used a touchscreen on which the voter made a choice, and then printed out a ballot sheet of that selection.

The ballot sheet was then placed into the ballot box and counted.

CENI had wanted "to be able [to] transmit the results from the voting machines to help us publish the results quickly but nobody wanted that procedure," he said.

The opposition had fiercely criticised the machines, describing them as vulnerable to hacking and manipulation.

"As the machines are not connected to anything," the business of collecting and collating the reports "is being done manually," Nangaa said.

"We had proposed a solution" for the DRC's infrastructure problems, "but it was refused, now we have to live with the situation," he said. 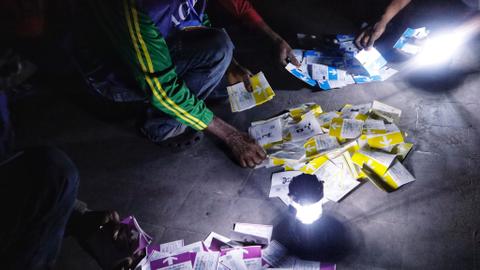