Demonstrations have broken out in some centres, break-outs have been reported, and the government faces two lawsuits over alleged mistreatment which it has yet to respond to

Kenya's government is facing growing criticism over quarantine centres it set up to curb the spread of the coronavirus, with witnesses saying some are squalid and expose residents to the risk of catching Covid-19.

Since mid-March, the government has enforced a mandatory 14-day quarantine period for anyone who flies into the country or has direct contact with someone infected and lives in an area where self-isolation is not allowed.

Those who can pay spend the quarantine in an upmarket hotel. Others are placed in government-run facilities established in buildings such as schools or universities.

Demonstrations have broken out in some centres, break-outs have been reported, and the government faces two lawsuits over alleged mistreatment which it has yet to respond to.

Reuters interviewed 12 people who have spent time in quarantine in the government-run centres. Two said conditions were satisfactory. The other 10, who asked not to be identified to avoid stigma, described filthy conditions with bedbugs, overflowing toilets and bad food.

Reuters sought comment from the facilities where these people were housed, but phone and text messages sent over several weeks received no responses. Health Ministry spokeswoman Judy Sirima declined comment.

One woman told Reuters she was quarantined at Nairobi's Kenya Medical Training Center for two weeks and tested negative for the  coronavirus.

Then others at the facility, where people were crowded together at mealtimes, tested positive. She was kept another week, and then tested positive too.

Reuters could not verify where she contracted the virus.

A woman in quarantine at the Karen Cooperative Retreat and Conference Center said she and others received no protective gear.

"We are not given masks; no gloves, no sanitizer," she said.

Public Testing
Kenya has reported 1,348 cases and 52 deaths from Covid-19, but large-scale public testing began in the country of 47 million only this month because of shortages of materials.

On Sunday, Kenya's Health Ministry tweeted that many people being tested were giving false contact information.

Robert Alai, a popular blogger, quickly offered an explanation for their reluctance.

"Because you treat those who test positive like pigs," he tweeted.

Because you treat those who test positive like pigs. I won’t tel you the truth either. https://t.co/ccgLjrOBaL

Alai has been sharing pictures of grim quarantine conditions which he says he received from people in government-run facilities. Reuters reached three by telephone and they confirmed the conditions.

Dr Mark Nanyingi, an infectious disease epidemiologist with the University of Nairobi, said the threat of having family quarantined could deter sick people from coming forward.

"Public health messaging shouldn’t be threatening," he said. "If we militarise this, we won’t have as much success."

Facing criticism over the quarantine centres, Health Minister Mutahi Kagwe said on May 6 they would be free.

"Testing, quarantine and isolation is free. Come out and be tested," the ministry tweeted on Tuesday.

Testing, quarantine and isolation is free. Come out and be tested . Don’t fear.

Today, 62 people have tested positive of COVID-19, 59 are Kenyans and the rest foreigners.

Until this month, the minimum rate for quarantine was $20 per night. Some centres had refused to release people who did not pay their bills.

Kagwe has also said people who break a dawn-to-dusk curfew will no longer be put in quarantine.

A Senate report last month said hundreds of curfew breakers had been quarantined alongside people who had been exposed to Covid-19, the respiratory disease the coronavirus can cause.

One woman, Caroline Akumu, told Reuters she was held in a quarantine centre where she and her two-month-old son slept on a concrete floor after she was accused of breaking curfew and refused to pay $187 to be released. She was freed only after a public uproar.

Tanzania votes for president amid opposition fears of violence and fraud 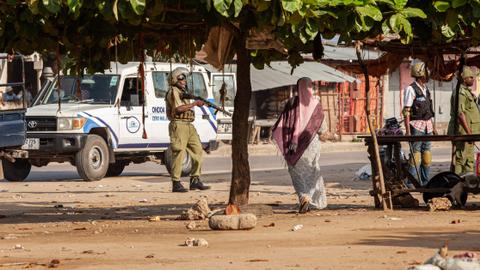