Although the ruling party candidate won the first democratic transition to power since 1960, he's also a close confidante of his predecessor who came to power after instigating a coup in 2008.

Ghazouani received 52 percent of the vote, a significant achievement in a country previously marred by military coups.

Abdel Aziz also headed the presidential guard when he seized power, saying he instigated a coup in order to avoid the military’s repressive rule.

Soon after Ghazouani was declared as the winner, the opposition candidate Sidi Mohamed Ould Boubacar (17.87 percent) objected to the results in a news conference he held with three other candidates, speaking of “multiple irregularities [that] eliminated any credibility” of the election.

A retired general and the Mauritanian army’s former chief of staff, Ghazouni resigned from the Ministry of Defence in early March 2019 to run for president.

His victory is significant because he is a president-elect rather than a coup leader, like many in Mauritania’s recent past. The country had been beset by coups starting in 1978, a mere 18 years after the country’s independence.

However some still see Ghazouani’s victory as problematic, because of his ties with the previous president. Ghazouani is also a member of Abdel Aziz’s Union for the Republic ruling party and opposition leaders have objected to the election results.

The opposition believes that this could be the continuation of a government dominated by military figures, even though the election was the first in Mauritania’s history that saw an elected president handing over power to another elected official.

The runners-up Biram Dah Abeid and Mohamed Ould Boubacar were vocal in their objection to the results.

"We are launching an appeal to the Mauritanian people ... to resist, within the bounds of the law, this umpteenth coup d'etat against the will of the people," Abeid told the opposition news conference, not sparing his words.

Boubacar also expressed his disappointment. "We reject the results of the election and we consider that they in no way express the will of the Mauritanian people," he said, promising to use "every legal means" to challenge them.

Abeid is an anti-slavery campaigner who came second in the election with 18.58 percent of the votes. Mauritania was the last country in the world to criminalise slavery, in 2007, and it still has a long way to go to ensure all citizens receive equal treatment as slavery becomes a thing of the past.

Last year, the African Union rebuked Mauritania for not doing enough to stop slavery in a landmark ruling. Rights groups report that tens of thousands of black Mauritanians still live as domestic slaves, serving masters that are lighter-skinned Arab or Berber citizens.

The country’s previous president Abdel Aziz has denied the prevalence of slavery in the country, with Human Rights Watch noting the government as claiming there’s only the legacy of slavery, “in the form of extreme poverty and exclusion”.

Quoting the Global Slavery Index, HRW says there is an estimated 90,000 slaves in the country, “including those who endure ‘modern’ forms of the practice, such as forced or bonded labour”.

It remains to be seen how Ghazouani will handle the controversial issue that has long plagued the country.

Mauritania heads to legislative, local polls ahead of presidential election 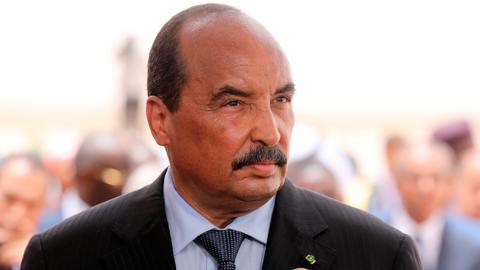 A long history of military coups in Mauritania