Rescue workers continue their efforts in the outskirts of the capital, Freetown as morgues overflow after a mountainside collapsed .

Rescue workers have recovered nearly 400 bodies from a mudslide in the outskirts of Sierra Leone's capital Freetown, the chief coroner said on Tuesday.

Over 100 of these fatalities are children.

So far, 109 children are reported among the dead after mudslides and flooding in #Freetown, acc. to data released by the Government. pic.twitter.com/CV4Yq9JbWH

Morgues are struggling to find space for all the deceased.

According to Red Cross estimates, the death toll may rise as around 600 people remain missing.

Dozens of houses were buried when a mountainside collapsed in the town of Regent on Monday morning, leaving more than 2,000 homeless. The Sierra Leone mudslide has been one of Africa's deadliest natural disasters in recent years.

Earlier in the day, President Ernest Bai Koroma issued a desperate appeal for help, saying the damage was "overwhelming us."

Sierra Leone is no stranger to humanitarian disaster.

It has suffered civil war and more recently it was struck by Ebola, leaving thousands dead. Now once again the morgues are full to capacity.
There are now fears of an outbreak of waterborne diseases like cholera.

The United Nations said on Tuesday it is evaluating humanitarian needs in the country.

"Contingency plans are being put in place to mitigate any potential outbreak of waterborne diseases such as cholera, typhoid and diarrhoea," UN spokesman Stephane Dujarric said.

He said the UN country team in Sierra Leone has mobilised and is "supporting national authorities in rescue operations, helping evacuate residents, providing medical assistance to the injured, registering survivors, and providing food rations, water and dignity kits to those affected."

He noted that the International Organization for Migration released $150,000 in emergency funds immediately following the flooding. 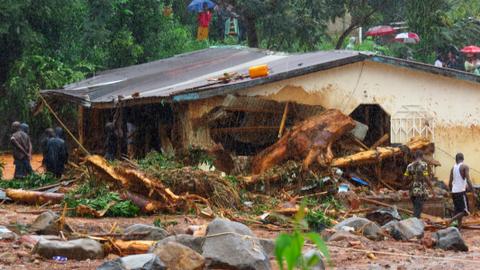