Sudan's Foreign Ministry said it was looking into the case after some of the men's families gathered outside the ministry building in Khartoum to protest amid a heavy security presence.

Sudan said on Tuesday it was investigating the case of Sudanese men who were transferred to Libyan oil facilities after being hired as guards by an Emirati company.

Sudan's Foreign Ministry said it was looking into the case after some of the men's families gathered outside the ministry building in Khartoum to protest amid a heavy security presence.

The families also demonstrated outside the Emirati embassy in Khartoum on Tuesday for a second time.

Two protesters said their relatives had travelled to the United Arab Emirates to work for a security services company as guards.

Some family members reveal that they have been deceived by the contracts given to them by UAE-based "Black Shield" security company as explained with details by a family member.

They had then been transferred to Ras Lanuf oil terminal in Libya last week, before returning to the UAE after protests over their case in Sudan.

Ras Lanuf is one of the oil ports that has been blockaded since Jan 18 by groups loyal to warlord Khalifa Haftar, an eastern-based Libyan warlord fighting to take control of the capital from the internationally recognised government.

The UAE is warlord Haftar's most important supporter in a conflict that has increasingly become a proxy war. Haftar is also supported by Egypt, Jordan and Russia, while his rivals are backed by Turkey.

The UAE has also been a prominent player in Sudan, where it has close ties to top military officials who toppled former president Omar al Bashir last year after months of street protests.

Sudan sent troops to fight in the Saudi-led coalition in Yemen, in which the UAE also participated, though Sudan's transitional government, which is sharing power with the military, has said it is drawing down its presence there.

Sudan's Foreign Ministry said it was working with Emirati authorities to investigate the case of guards transferred to Libyan oil facilities despite being hired on contracts that made no mention of such work.

Emirati officials did not immediately respond to a request for comment.

Libya has been divided since 2014 into rival camps based in Tripoli and the east, both with their own sets of institutions.

Foreign fighters and guards including many from Sudan have been used by both sides in Libya, as they have struggled to control territory and strategic sites including oil ports and fields across the country's vast landmass.

The oil blockade has caused Libya' s production to plunge from about 1.2 million barrels per day (bpd) to less than 300,000 bpd. 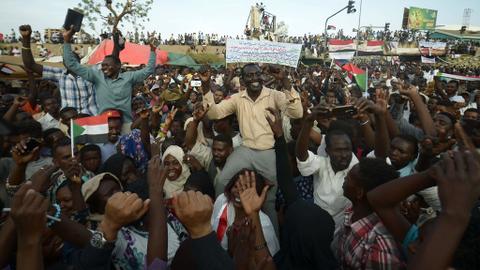