Zimbabwe's governing ZANU PF part on Tuesday made a motion in the country's parliament to impeach President Mugabe which was seconded by the main opposition party.

Earlier, parliament opened a session to begin the process of impeaching President Robert Mugabe, which could lead to him being stripped of office.

Parliament speaker Jacob Mubenda gave permission for a joint session of the House of Assembly and the Senate to debate a motion that would trigger impeachment proceedings against Mugabe.

"This motion is unprecedented in the history of post-independence Zimbabwe," Mubenda declared.

TRT World's Caitlin McGee has more on the story.

Lawmakers from across the political spectrum have called on Mugabe to quit after the military seized power and tens of thousands of citizens took to the streets to demand the 93-year-old's resignation.

They accuse him of allowing his ambitious wife Grace to plunder the country and to usurp his power.

She emerged as the front-runner to replace the veteran leader when Mugabe fired his vice president Emmerson Mnangagwa.

That prompted the current crisis as the army, alarmed by Grace's rise, deployed armoured vehicles on the streets and took power.

There were tense protests outside parliament as hundreds of demonstrators - from rival political parties - shouted for Mugabe to go.

South African President Jacob Zuma and his Angolan counterpart, Joao Lourenco, will travel on Wednesday to Zimbabwe, where Mugabe is under growing pressure to resign, South Africa's state broadcaster said.

He has stated he needed to heed the "clarion call" of his people and step down.

Mnangagwa fled Zimbabwe shortly after being sacked by Mugabe early this month.

Mnangagwa said he had rejected an invitation by Mugabe to return home to discuss the current political situation.

"I told the president that I would not return home now until I am satisfied of my personal security, because of the manner and treatment given to me upon being fired."

Mnangagwa was initially believed to be in South Africa.

Zimbabwe's influential war veterans on Tuesday called for immediate protests against Mugabe as parliament moved to impeach the veteran leader.

"All the people must leave what they are doing, come to Harare ... we just want to see the back of Mugabe immediately. The protests must begin now, we cannot have another hour of Mugabe," said Zimbabwe War Veterans' Association chairman Chris Mutsvangwa.

The powerful war veterans had previously been the staunchest supporters of Mugabe's long rule but are now seen as backing Mnangagwa whose removal by the president sparked the current crisis. 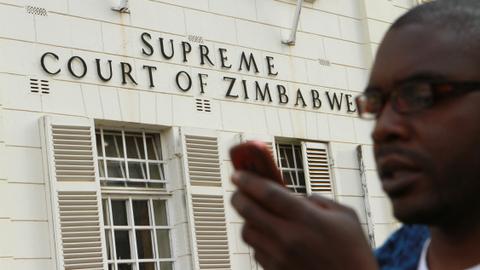