The 35-year-old politician has declared himself interim president but there is little sign that he is any closer to achieving his goal, even with the backing of the Trump administration.

Shortly after the announcement was made by the 35-year-old politician, United States President Donald Trump announced that he would recognise Guaido as the new interim leader of the embattled country.

Before US-backed Guaido emerged in January, the majority of Venezuelans (81 percent, to be precise) had never heard of him. By the following week, Guaido was trying to instigate a coup.

But who is Juan Guaido?

Raised in a middle-class home, Guaido graduated from Andres Bello Catholic University in 2007 with an industrial engineering degree. He then went on to study governance and political management at George Washington University.

During that time, he also studied under Venezuelan economist Luis Enrique Berrizbeitia, a leading Latin American neo-liberal economist who worked for the International Monetary Fund and in various government positions in the 1970s and 80s, including the Venezuelan energy ministry. He also served as governor of the Organisation of the Petroleum Exporting Countries (OPEC).

In 2007, Guaido was part of student protests in Venezuela. Their aim at the time was to bring down the Hugo Chavez government, Maduro's now late predecessor.

A group known as ‘Generation 2007’ was born out of these efforts.

The group sought to delegitimise the Chavez government by using the works of Gene Sharp’s book, From Dictatorship to Democracy.

Some of the activists, who had gone on to lead this student group had two years earlier gone to Belgrade, Serbia, to train with the Center for Applied Non-Violent Action and Strategies (CANVAS), which is funded by the US.

A series of leaked emails from security think tank Stratfor said of the organisation: “They are still hooked to US funding and basically go around the world trying to topple dictators and autocratic governments [that the US does not like].”

Some have suggested that Guaido was in Belgrade at the time to receive this training. However, CANVAS Founder Srdja Popovic has denied the allegations, all the while wishing his ‘friend’ every success in toppling the Venezuelan government.

Guaido entered parliament in 2015 after an earlier failure in 2010.

Winning 26 percent of the vote in his home seaside state of Vargas, the up-and-coming politician has gone on a war footing against the Maduro government with the backing of his friend, Leopoldo Lopez, a prominent member of an aristocratic Venezuelan family.

Lopez’s Popular Will social-democratic party, along with Guaido, were involved in anti-government street protests that blocked highways and streets in the Venezuelan capital Caracas, in 2014. The violent clashes left 43 people dead and anti-Maduro protests left more than 127 dead in 2017, many of them police and Maduro supporters.

Upon assuming his position in parliament in 2018, Guaido spearheaded the opposition coalition, dubbed the Democratic Unity Roundtable.

It wasn’t, however, until January when he received a phone call from US Vice President Mike Pence, who pledged Washington’s support if Guaido decided to attempt to overthrow elected President Nicolas Maduro.

The tightly orchestrated and coordinated attempt by the Trump administration to replace Maduro took off in January of this year, with Washington being the first capital to recognise the self-declared leader, followed by 11 European states.

The Venezuelan opposition and Guaido, in particular, have found it challenging to maintain the momentum without continuous foreign intervention. Indeed, the embattled self-proclaimed leader is failing to exert any meaningful authority over state institutions and foreign affairs.

Tuesday's ultimately failed ‘military coup plot’ saw renegade military officers on the streets with Guaido and erstwhile ally Lopez attempt to encourage the military to back them instead of Maduro.

However, this isn't the first time Guaido miscalculated when to carry out the coup, having planned it on the eve of May Day, during which the ruling government had thousands of supporters on the streets.

After more than a decade of protests against the government, consecutive attempts to overthrow it and now finally the coup, Guaido has attempted to bend Venezuela to his will with the backing of a hawkish Trump administration seeking to do away with a government that is at odds with Washington.

Yet what remains unclear is whether anyone (save a small group of people) supports him. 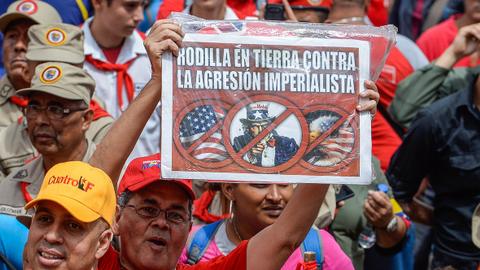