1
Police violence victim Tyre Nichols to be laid to rest in US' Memphis city
2
US-India alliance targets arms, Artificial Intelligence to challenge China
3
'Up to 50%' of medicines in Africa's Sahel region are fake or substandard
4
US piles more pressure on Huawei as China slams 'technology hegemony'

US President Biden shares on CNN details of a chat on human rights with his Chinese counterpart Xi Jinping, who has drawn global criticism for holding Muslim Uighurs in internment camps and other abuses.

China must pay a price for its human rights abuses, US President Joe Biden warned, responding to queries at a televised event on the Asian nation's handling of Muslim minorities in its far western region of Xinjiang.

"Well, there will be repercussions for China and he knows that," Biden said of Xi, when pressed on the issue on Wednesday at the Milwaukee, Wisconsin town hall event televised on broadcaster CNN.

"The US will reassert its global role in speaking up for human rights", Biden said, adding that he would work with the international community to get China to protect them.

Biden said he had explained to Xi during a recent phone call that, “No American president can stand as president if he does not reflect the values of the United States.”

"China is trying very hard to become a world leader and to get that moniker and be able to do that they have to gain the confidence of other countries," Biden said on his first official outing away from Washington since taking office as president in January.

"As long as they are engaged in activity that is contrary to basic human rights, it is going to be hard for them to do that," he added.
READ MORE: Biden presses Xi on trade and human rights in first phone call

In a two hour phone call with Xi earlier this month, Biden emphasised the US priority of preserving a free and open Indo-Pacific region, where the US and China are major strategic rivals.

He also voiced concern about Beijing’s "coercive and unfair" trade practices and rights issues, such as its Hong Kong crackdown, the Xinjiang internments, and increasingly assertive actions in Asia, including toward Taiwan, which China claims as its own.

"The central principle of  Xi Jinping, is that there must be a united and tightly-controlled China. And he uses his rational for the things he does based on that."

China has imprisoned more than 1 million people, including Uighurs and other mostly Muslim ethnic groups, in a vast network of "concentration camps", according to US officials and human rights groups.

People have been subjected to torture, sterilisation and political indoctrination in addition to forced labour as part of an assimilation campaign in a region whose inhabitants are ethnically and culturally distinct from the Han Chinese majority, critics say.

China has denied all the charges, but Uighur forced labour has been linked by reporting from the AP to various products imported to the US, including clothing and electronic goods such as cameras and computer monitors.

China says its policies in Xinjiang Uighur Autonomous Region aims only to promote economic and social development in the region and stamp out radicalism.

It also rejects criticism of what it considers its internal affairs. 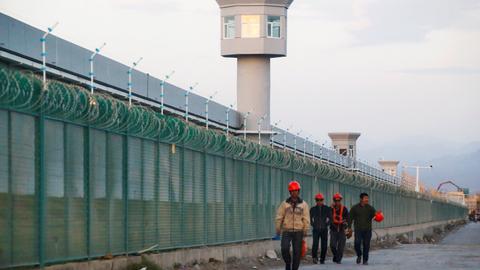 1
Police violence victim Tyre Nichols to be laid to rest in US' Memphis city
2
US-India alliance targets arms, Artificial Intelligence to challenge China
3
'Up to 50%' of medicines in Africa's Sahel region are fake or substandard
4
US piles more pressure on Huawei as China slams 'technology hegemony'