Uncontrolled wildfires rage across US West, incinerating town of Malden and threatening communities in Oregon and California, powered by high winds and unprecedented heat.

Uncontrolled wildfires have raged across the US West, incinerating the Washington town of Malden and threatening communities in Oregon and California, driven by high winds and unprecedented heat over the Labor Day weekend.

Firefighters and emergency responders searched on Tuesday for residents of tiny Malden, about 483 km east of Seattle, a day after a firestorm destroyed 80 percent of its homes along with the fire station, post office, city hall and library.

"The scale of this disaster really can't be expressed in words," said Sheriff Brett Myers.

"The fire will be extinguished but a community has been changed for a lifetime. I just hope we don't find the fire took more than homes and buildings. I pray everyone got out in time."

The fire that destroyed Malden was one of the dozens of large blazes burning in Washington, Oregon, and California over the Labor Day Weekend, as temperatures in the western part of Los Angeles' San Fernando Valley topped 49 Degree C.

The arrival of strong gusts after the Labor Day weekend's unprecedented temperatures saw most of California placed under weather warnings, with 14,000 firefighters battling 25 major wildfires across the country's most populous state.

READ MORE: High risk of more wildfires in California as weather heats up

#RedFlagWarning in effect today through Wednesday in much of California due to strong winds, low humidity and high temperatures. This is #CriticalFireWeather so use caution when outdoors. https://t.co/upBwccxXFO pic.twitter.com/tDd8NBwIkG

The Creek Fire in the Fresno area in central California, which caused the weekend emergency evacuation of more than 200 people vacationing at a popular reservoir grew overnight under what CalFire on Tuesday called "extreme conditions."

The blaze, which started on September 4, threatened the community of Shaver Lake, fuelled in part by trees killed by the invasive bark beetle, the fire agency said.

It was completely uncontained and had burned 58,274.7 hectares by Tuesday morning, CalFire said.

Evacuation centres had been set up in Fresno and Madera Counties as the fire moved aggressively south, officials said.

An unknown number remained to await rescue as homes were engulfed by flames in the Tollhouse area, while videos on social media showed the fire surrounding campsites around the popular holiday spot Mammoth Pool Reservoir.

— Office of the Governor of California (@CAgovernor) September 7, 2020

In California, Pacific Gas & Electric shut off power to thousands of residents in 22 counties to prevent sparks from its equipment from setting off more fires.

A fire in San Bernardino County, southeast of Los Angeles, that official said was caused by a pyrotechnic device used during a gender reveal party, had burned nearly 11,000 acres by Tuesday morning and was 16 percent contained, CalFire said.

California Governor Gavin Newsom on Sunday declared a state of emergency in Fresno, Madera, Mariposa, San Bernardino, and San Diego counties due to the wildfires.

About 100,000 customers lost power amid windstorms and fire, and power was shut off to about 5,000 residents west of Mt. Hood to prevent sparks that might start new blazes, it said. 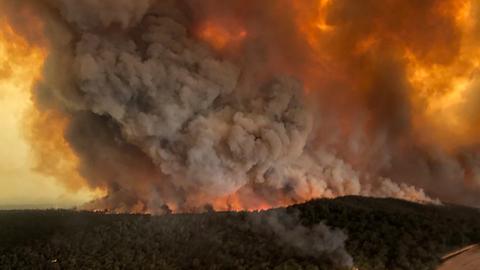