Coronavirus 'not under control' – Trump

US President Donald Trump acknowledges pandemic may send US economy into recession and suggests nation may be dealing with virus until "July or August."

The White House on Monday urged all older Americans to stay home and everyone to avoid crowds and eating out at restaurants as part of sweeping guidelines meant to combat an expected surge of coronavirus cases as US president acknowledged the pandemic was "not under control".

President Donald Trump, in a marked shift in tone about a crisis that has enveloped the globe, for the first time acknowledged that the pandemic may send the US economy into a recession and suggested that the nation may be dealing with the virus until "July or August."

The guidelines, which would rewrite the norms of American society for half a month, were released as the US government tried to blunt the impact of an expected surge of coronavirus cases, racing to bolster testing and aid even as the financial markets tumbled.

Among the new recommendations: Over the next 15 days, Americans should not gather in groups of more than 10 people, schooling should be at home and discretionary travel and social visits should be avoided. If anyone in a household tests positive for the virus, everyone who lives there should stay home. The administration did not define what an an older American was in terms of the recommendation to stay home.

"We will rally together as one nation and we will defeat the virus," Trump said. "We can turn the corner and turn it quickly."

The president, in an appearance in the White House briefing room, when asked when the pandemic would subside, said that “if we do a really good job" the crisis could pass by the height of summer.

That was a far less optimistic take than in his earlier predictions that it could be over within weeks.

He also acknowledged that the virus, which has battered the global markets, may send the nation's economy into a recession, a potentially brutal blow for an incumbent in an election year.

Trump was unusually somber about the matter after playing it down for weeks.

He acknowledged the pandemic was "not under control" in the United States or globally but said he did not yet plan to call for domestic travel restrictions and said he was reluctant to advise states to cancel the primary elections ahead.

Without providing details, he said "we're going to back the airlines 100 percent," a note of reassurance for an industry crippled by travel bans and fears of spreading the virus.

The expansive guidelines were issued on a day of fast-moving developments in a capital resplendent in cherry blossoms but awash in anxiety.

'We could be Italy'

Congress convened to try to finish an aid package and consider another one behind it.

The Supreme Court postponed oral arguments for the first time in over a century. And the US surgeon general said that the United States is about where Italy was two weeks ago in the coronavirus struggle, a sign that infections are expected to rise.

"When you look at the projections, there's every chance that we could be Italy," Surgeon General Dr. Jerome Adams told Fox News. Yet he said the US has opportunities to mitigate the pandemic.

Two weeks ago, Italy had 1,700 cases of coronavirus and had reported 34 deaths. Now, Italy is reporting an estimated 25,000 cases and more than 1,800 deaths. About 3,800 cases have been reported in the United States and so far, more than 65 people have died from coronavirus.

Although the numbers may not be directly comparable, the trajectory is, as Adams sees it.

The administration also alleged that a foreign disinformation campaign was underway aimed at spreading fear among Americans already spooked by the pandemic.

The vast majority of people recover.

According to the World Health Organization, people with mild illness recover in about two weeks, while those with more severe illness may take three weeks to six weeks to recover.

The worldwide outbreak has sickened about 175,000 people and left more than 6,700 dead.

Trump in recent days has imposed sweeping travel restrictions for much of Europe.

On Saturday, he added Britain and Ireland to a list of countries facing travel restrictions over the next 30 days.

The State Department on Sunday said it would allow US personnel to leave their diplomatic or consular posts worldwide if they or family members were medically determined to be at a higher risk of falling very ill if exposed to the virus.

Also, the White House said on Monday it would cancel the holiday Easter Egg Roll held annually on the South Lawn. 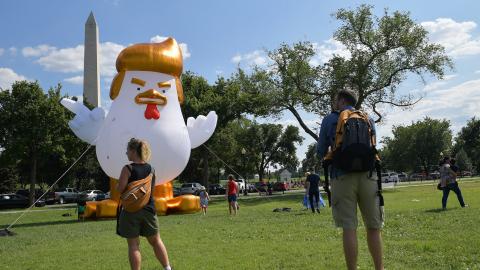