1
Biden to end US Covid-19 emergencies on May 11
2
Peru's president renews call for early elections amid protests
3
Secret US documents found at ex-VP Mike Pence's home
4
Trump warns 2024 election 'our one shot' to save US
5
'He's no Pablo Picasso': US Republicans probe Hunter Biden's artwork sales

Inequity of vaccine distribution comes into sharper focus on third day of UN General Assembly with South African leader saying, "It is an indictment on humanity that more than 82% of world doses have been acquired by rich countries."

The inequity of Covid-19 vaccine distribution has come into sharper focus as many of the African countries whose populations have little to no access to the life-saving shots step to the podium to speak at the UN's annual meeting of world leaders.

Already, the struggle to contain the coronavirus pandemic has featured prominently in leaders' speeches. Country after country have acknowledged the wide disparity in accessing the vaccine, painting a picture so bleak that a solution has at times seemed impossibly out of reach.

"It is a great concern that the global community has not sustained the principles of solidarity and cooperation in securing equitable access to Covid-19 vaccines," South Africa's President Cyril Ramaphosa told the UN General Assembly (UNGA) on Thursday.

"It is an indictment on humanity that more than 82 percent of the world vaccine doses have been acquired by wealthy countries while less than one percent has gone to low income countries."

Unless we address this as a matter of urgency, he said, the pandemic will last much longer and new mutations will emerge and spread.

– Palestinian people must be free from [Israeli] occupation
– Western Sahara has right to self-determination
– Expresses solidarity with Cuba, calls for embargoes on it to end pic.twitter.com/TP4ZWz0hGT

Other African leaders said it was "appalling" that while rich countries debate booster shot doses, many poor countries have only been able to vaccine 1-2 percent of their populations.

Angola president João Lourenço said it was "shocking to see the disparity between some nations and others with respect to the availability of vaccines."

"These disparities allow for third doses to be given, in some cases, while, in other cases, as in Africa, the vast majority of the population has not even received the first dose," Lourenço said.

The US, Britain, France, Germany, and Israel are among the countries that have begun administering boosters or announced plans to do so.

Namibia President Hage Geingob called it "vaccine apartheid," a notable reference given the country's own experience with apartheid when neighboring South Africa’s white minority government-controlled South West Africa, the name for Namibia before its independence in 1990.

"The hoarding and inequitable distribution with the resulted uneven vaccination patterns across the globe is not acceptable. Vaccine nationalism is self-defeating and contrary to the mantra that no one is safe until everyone is safe," said Emmerson Dambudzo Mnangagwa, President of the Republic of Zimbabwe.

In a prerecorded speech on Wednesday, Norway's Prime Minister, Erna Solberg said, "Some countries have vaccinated their populations, and are on the path to recovery. For others, the lack of vaccines and weak health systems pose a serious problem".

Countries slated to give their signature annual speeches on Thursday include Botswana, Angola, Burkina Faso, Iraq and Libya.

Also among them will be Zimbabwe, where the economic ravages of the pandemic have forced some families to abandon the long-held tradition of taking care of their older people.

And Uganda, where a surge in virus cases have made scarce hospital beds even more expensive, leading to concerns over alleged exploitation of patients by private hospitals.

On Wednesday, during a global vaccination summit convened virtually on the sidelines of the UNGA, President Joe Biden announced that the United States would double its purchase of Pfizer's Covid-19 shots to share with the world to 1 billion doses, with the goal of vaccinating 70 percent of the global population within the next year.

The move comes as world leaders, aid groups and global health organisations have grown increasingly vocal about the slow pace of global vaccinations and the inequity of access to shots between residents of wealthier and poorer nations.

The World Health Organization says only 15 percent of promised donations of vaccines – from rich countries that have access to large quantities of them – have been delivered.

During an anti-racism event on Wednesday commemorating a landmark but contentious conference 20 years ago, President Felix Tshisekedi of Democratic Republic of Congo pointed to the fact that only about 1 in 1,000 people in his country have gotten at least one shot.

The disparity in vaccine availability around the world "clearly does not demonstrate equality between the countries and peoples of this world," Tshisekedi said.

READ MORE: 'We are on the edge of an abyss': UNGA kicks off amid Covid, climate crisis

Cuba: US fighting 'non-conventional war against it

Cuba's President Miguel Diaz-Canel delivered a blistering attack against the government of the United States saying it is fighting a "non-conventional" war aimed at unseating the Cuban government.

"The longest economic, commercial and financial blockade which has ever been imposed on any country has intensified in an opportunistic and criminal fashion in the midst of this pandemic," Diaz-Canel said referring to the 60-year-long US embargo of Cuba.

Diaz-Canel said the United States is promoting a "serious international rift ... with the harmful use and abuse of economic coercive measures."

"We are seeing today unacceptable political practices in the international context that go against the universal  commitment to defend at the United Nations charter, including the sovereign right to self-determination."

To highlight his point Diaz-Canel had only point to the United States' years in Afghanistan to serve as an example of what he sees as the consequences of manipulation by the US government.

"Afghanistan is not an isolated case, and it became obvious that wherever the United States intervenes, instability, death and hardship increase leaving behind long-lasting scars."

Diaz-Canel did address Cuba's scientific achievements during the pandemic saying Cubans are "proud of the scientific Cuban community" and aim to immunize everyone on the island by the end of 2021.

The Soberana 02 and the Soberana Plus vaccines were developed by the Finally Institute and are produced on the island.

A third, Abdala, was created by Cuba's Center for Genetic Engineering and Biotechnology.

Cuba is the only country in Latin America that manufactures its own vaccines.

Salih warned against adopting a lax approach or being distracted by regional conflict in the fight against terrorism, for it will usher a return of terror groups, in his address to the UN General Assembly.

The leader also commented on the Israel-Palestine conflict, saying the Middle East region won't see peace until a two-state solution is reached.

– If we are lax and distracted by regional conflict, terror groups will return
– Urges global support to rebuild regions freed from terrorism
– Iraq's situation will not normalise unless corruption is eradicated pic.twitter.com/dlL5jqYkMz

Iraq is trying to rein in powerful Iran-backed militias and deal with a resurgent Daesh — the hardline group that took over a third of Iraq in 2014 and was beaten militarily in 2017.

After decades of conflict, Iraq is seeking to reclaim a leadership role and status in the Arab world with a centrist policy and a determination among the country’s top leaders to maintain good relations with both Iran and the United States and its regional allies. 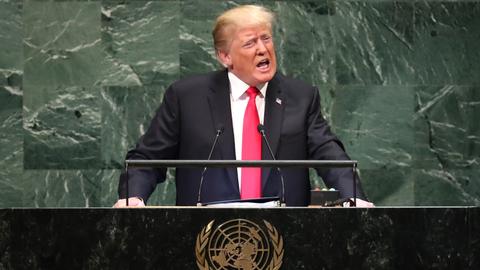 1
Biden to end US Covid-19 emergencies on May 11
2
Peru's president renews call for early elections amid protests
3
Secret US documents found at ex-VP Mike Pence's home
4
Trump warns 2024 election 'our one shot' to save US
5
'He's no Pablo Picasso': US Republicans probe Hunter Biden's artwork sales