Federal law enforcement agents arrested a Tallahassee man for issuing a call to arms against protesters at the Florida State Capitol building.

A Tallahassee man has been arrested by federal law enforcement agents over attempting to incite violence at the Florida State Capitol.

A press release from the United States Attorney’s Office for the Northern District of Florida read that Daniel Baker was arrested for transmission, in interstate commerce, of a communication containing a threat to kidnap or to injure.

Baker, is a former US Army Airborne infantryman kicked out of the service who in 2017 joined the YPG/PKK terrorist organisation as a sniper, his social media reveal.

Mass demonstrations are being planned this weekend in state capitols across the country to protest the results of the US November 3 election, which US President Donald Trump lost to President-elect Joe Biden by 7 million votes. Trump has refused to accept the results and has called on his supporters to demonstrate against the certified outcome.

READ MORE: Why is the US inviting the PKK terror group to Syria talks?

The statement read that Baker has been urging people through social media to encircle protesters and keep them at the Capitol using guns and that he was actively attempting to purchase additional firearms within the last 24-48 hours.

Several photos and YouTube videos show Baker with a variety of firearms, including those with high-capacity magazines

The YPG is a "sub-affiliate of" the PKK, the US Department of Justice said on Friday in announcing a military veteran who went to fight with the YPG has been taken into custody.

Attorney's Office underlined that Baker claimed on social media that he was a trained sniper for the YPG, and he can be seen in a documentary film fighting Daesh and against Turkey.

Both Turkey and the US consider PKK as a terrorist organisation and authorities in DC were turning blind-eye to any connection between the group and YPG.

"YPG is a sub-affiliate of the Kurdistan's Working Party (PKK), which is designated by the United States government as a Foreign Terrorist Organization," the office said.

US support to YPG is the most problematic issue in the relations between Washington and Ankara.

The US and the YPG have been collaborating in northern Syria since 2015 when Washington carved out the so-called Syrian Democratic Forces to fight the growing presence of Daesh in the region.

In its more than 30-year terror campaigns in and around Turkey, the YPG/PKK has been responsible for the deaths of some 40,000 people, including women, children, and infants.

"Daniel Baker's actions show that he is a dangerous extremist, and the law-abiding public is safer now that he has been arrested. We are, and will remain, on high alert and will take all appropriate actions against credible threats to the people of our District," he added.

Baker is expected to make his initial appearance virtually on Saturday afternoon at 2:00 pm (local time) at the US Courthouse. 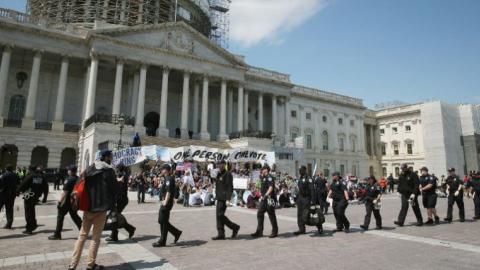 Donald Trump calls for GOP unity, hints at run for president in 2024