"The FBI has completed its investigation at Talladega Superspeedway and determined that Bubba Wallace was not the target of a hate crime," NASCAR said in a statement after outrage erupted over the incident.

US investigators have said that the noose found in the garage stall of NASCAR's only black driver Bubba Wallace was not evidence of a racist hate crime but only a rope that had been there for months, .

"The FBI has completed its investigation at Talladega Superspeedway and determined that Bubba Wallace was not the target of a hate crime," NASCAR said in a statement on Tuesday after outrage erupted over the incident, at a time when protests against racial injustice are sweeping the United States.

The probe found the garage door pull-rope fashioned like a noose was in the stall long before Sunday's race at Talladega in Alabama.

"The FBI learned that garage number 4, where the noose was found, was assigned to Bubba Wallace last week," Northern District of Alabama Attorney Jay Town and FBI Special Agent in Charge Johnnie Sharp, Jr said in a statement announcing there would be no charges.

"The investigation also revealed evidence, including authentic video confirmed by NASCAR, that the noose found in garage number 4 was in that garage as early as October 2019.

The FBI investigation, which included 15 agents sifting through evidence and conducting interviews, was launched on Monday, a day after the noose was found.

Wood Brothers Racing, who had a car in that garage for a race last autumn, cooperated in the investigation, saying in a statement on Twitter that one of their employees had seen the rope there.

"We immediately alerted NASCAR and have assisted in the investigation in every way possible," the team said.

Security had been stepped up for Wallace, the only black driver who races full time in NASCAR's top Cup series and who recently successfully campaigned for the banning of the Confederate flag at the popular stock car series events.

The Confederate flag, seen as a symbol of slavery and racism by many, has been a staple at NASCAR tracks, particularly in the sport's southern US heartland.

Before the scheduled Sunday start of the race at Talladega, the flag was flaunted by some outside the speedway.

However, the weather-delayed race on Monday turned into a mass show of support as drivers closed ranks around Wallace.

He was visibly moved before the start as his fellow drivers rallied behind him at the starting line.

Multiple drivers and crew then joined forces to push Wallace's No.43 car to the front of the grid.

Wallace exited the car and appeared to be in tears as driver after driver hugged him.

Among the well-wishers on Monday was team owner and NASCAR legend Richard Petty.

"We appreciate the FBI's quick and thorough investigation and are thankful to hear this was not an intentional, racist act against Bubba," NASCAR said.

"We remain steadfast in our commitment to providing a welcoming and inclusive environment for all who love racing." 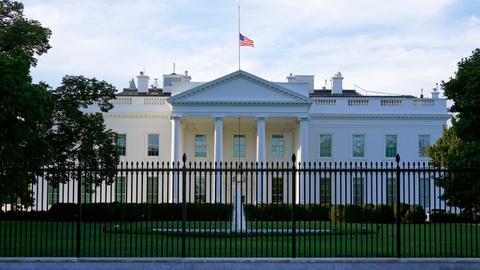 US official: Envelope with 'ricin' sent to White House