Guatemala to relocate its embassy in Israel to Jerusalem

Ramallah-based Palestinian government slammed the decision saying "it violates the rules of international law" after Guatemala's President Jimmy Morales announced the decision at a pro-Israel lobby conference in Washington.

Guatemala will relocate its embassy in Israel to Jerusalem this May, two days after the United States shifts its mission, the Latin American country's president announced on Sunday.

Guatemalan President Jimmy Morales told a cheering crowd that "as a sovereign decision, we recognise Jerusalem as the capital of Israel."

Speaking at the annual conference of the American Israel Public Affairs Committee (AIPAC), an influential pro-Israeli lobbying group, he said, "Under my instructions, two days after the United States moves its embassy, Guatemala will return and permanently move its embassy to Jerusalem."

"I would like to thank President Trump for leading the way."

Trump's decision in December to transfer the US embassy from Tel Aviv to the disputed city of Jerusalem has drawn widespread condemnation, with critics saying it damages hopes for a negotiated Middle East peace.

"We are sure that many other countries will follow in our steps."

Only seven small countries – including Guatemala and Honduras – sided with the US and Israel on a non-binding December 21 UN General Assembly resolution rejecting Trump's decision to recognise Jerusalem as Israel's capital.

Thank you Guatemala 🇬🇹! Thank you President@jimmymoralesgt ! The decision to move your embassy soon to #Jerusalem is courageous and visionary. We are happy to welcome you to our beloved eternal capital. 🇬🇹🇮🇱! @IsraelMFA

The decision has been slammed by the Ramallah-based Palestinian government in a statement. The government called on Arab and Muslim countries to adopt a “firm stand” in opposition to the move.

“The Guatemalan decision violates the rules and principles of international law and resolutions adopted by the international community,” the statement read.

The White House plans to open its new facility in Jerusalem on May 14, coinciding with the 70th anniversary of Israel's creation.

During an Oval Office meeting with Israeli Prime Minister Benjamin Netanyahu on Monday, Trump said he may visit Israel in May for the opening ceremony of the US Embassy in Jerusalem.

Trump also said his embassy decision was "appreciated in a big part of the world."

Israel claims all of Jerusalem as its capital, while the Palestinians see the eastern sector as the capital of their future state.

There had long been international consensus that the city's status should be settled as part of a two-state peace deal between Israel and the Palestinians. 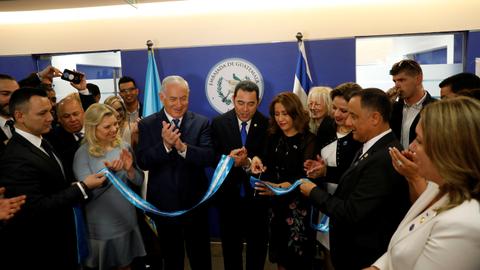