In photos: Colombia mudslides leave trail of death and destruction

Torrential rains have caused severe flooding and mudslides in the city of Mocoa, in south-west Colombia, killing 254 people and injuring hundreds. Many people have been reported missing.

The calamity struck in the early hours of Saturday when the rushing waters of the Mocoa River breached its banks, washing away roads, destroying houses and filling them with mud and debris.

Soon after declaring a national state of emergency, Colombian President Juan Manuel Santos flew to Mocoa on Saturday to view the crisis. Santos said the death toll could rise. "We will do everything possible to help them. It breaks my heart," he said.

The relief efforts continued through the weekend. "Until we have the last person identified we are not going to stop," Santos said. More than 1,100 police officers were called in for rescue operations to help people in 17 affected neighbourhoods.

The town of Mocoa has been the worst hit. Power and water supply lines and hospitals have been destroyed. Several roads have also been washed away. Gabriel Umaña, a spokesman for the Colombian Red Cross, told CNN that 300 families have been displaced and more than two dozen homes have been flattened.

Disaster officials said more than 500 people took refuge in makeshift shelters where they were provided with food and other basic necessities. They say that getting life back to normal is going to be a huge challenge and could take several weeks.

Rescue workers and locals have been frantically searching for their loved ones. Lists of missing people have been circulated on social media.

Two years ago, heavy downpours killed about 80 people in north-west Colombia. In recent months, the country has been hit by several natural disasters but the Mocoa mudslide is the deadliest. In 1985, more than 20,000 people were killed after the Nevado del Ruiz volcano erupted, triggering mudslides that buried the town of Armero.

Photos by AFP and Reuters 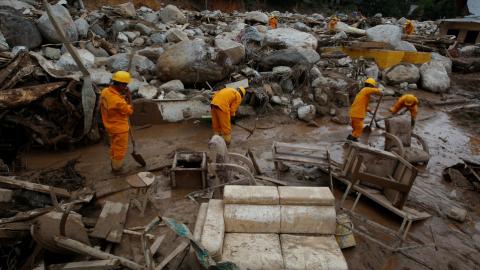