Kirsten Fontenrose, the official in charge of US policy towards Saudi Arabia resigned on Friday. US media says the circumstances of her resignation are unclear, but she may have clashed with her superiors over what to do about Khashoggi’s killers.

Kirsten Fontenrose, a top Saudi policy official at the White House, had fought for tough measures against Riyadh following the killing of Jamal Khashoggi, according to US media reports.

The National Security Council official in charge of US policy towards Saudi Arabia, resigned on Friday evening.

Prior to her resignation, Fontenrose had reportedly been to Saudi Arabia to discuss US sanctions against those involved in the killing of Khashoggi, the dissident Saudi journalist who disappeared after entering the Saudi consulate in Istanbul more than a month ago.

Breaking the story of her resignation, The New York Times also reported that Fontenrose had successfully fought to place Saud al Qahtani, a top adviser to Crown Prince Mohammed bin Salman, on the sanctions list.

Fontenrose had been placed on administrative leave before her resignation, according to an article published by the Washington Post.

She had previously worked for Cambridge Analytica’s parent company, SCL Group, as reported by Politico. While there is no indication that she was involved in the election meddling of Cambridge Analytica, her previous employment casts a shadow on her US government work.

Over the weekend, US President Donald Trump gave conflicting statements as to whether he had received intelligence from the CIA about who was responsible for Khashoggi’s killing. On Saturday morning, as he prepared to visit communities affected by the California wildfires, Trump told reporters outside the White House that he had been told the Saudi crown prince had not played a role in Khashoggi’s killing.

Later the same day, Trump spoke to reporters in Malibu, California, and backtracked on his earlier statement. He said it was too early to discuss the subject as the CIA had not “assessed anything yet”.

During his flight from Washington DC to California, Trump had spoken with CIA Director Gina Haspel and Secretary of State Mike Pompeo, according to Sarah Sanders, the White House Press Secretary.

According to Trump, reporters and the public will have to wait until Tuesday for a report from the CIA that will shed light on what “we think the overall impact was and who caused it, who did it”.

It remains unclear under what circumstances Fontenrose has resigned, but US media reports suggest that her determination to get to the real perpetrators responsible for the killing may have contributed to her falling out with her superiors at the National Security Council.

She had served as the director for the Persian Gulf region since March, according to her LinkedIn page. Previously she was a senior advisor in strategic planning at the US Department of State for five-and-a-half years. 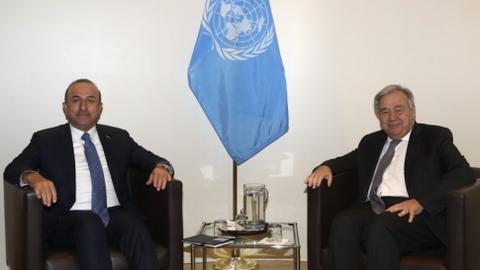