Government alleged financial crimes were committed through a press freedom training and defence centre that Chamorro directed for 20 years and which has since been shuttered.

Nicaragua's main opposition figure and would-be presidential challenger to Daniel Ortega was sentenced to eight years in prison after being found guilty of financial crimes, a human rights group said.

Cristiana Chamorro, 68, will remain under house arrest, as she has been since she was detained in June, according to the Nicaraguan Center for Human Rights (CENIDH).

The charges brought by President Ortega's government had prevented her from running in the November presidential election in which she was regarded as the favorite.

Chamorro was accused by the state of laundering money, property and assets through her media foundation as well as promoting "ideological falsehood" and destabilising the government.

Chamorro's brother Pedro Joaquin Chamorro and two former employees of her free speech foundation, as well as her driver, were also convicted by a court last week.

Pedro Joaquin Chamorro was sentenced to nine years in prison and is being held at the Judicial Assistance Directorate (DAJ) of the police.

The three others also received sentences of up to 13 years.

CENIDH said Cristiana Chamorro and the others were also slapped with "million-dollar fines" that are "impossible to pay, and if they are commuted, it would be the equivalent to life imprisonment."

Chamorro has denied the charges against her and said they were only brought to block her from running against Ortega, the 76-year-old former guerrilla who has governed since 2007 and who won a fourth consecutive term in November.

"They want to stain my name, but they will not succeed," she told the court at the end of the trial, according to 100% News, an online media outlet critical of the government. "They will never succeed in staining the name of my father or my mother, because I am innocent."

A journalist not aligned with any political party, Chamorro is one of seven former presidential candidates and nearly 40 opposition figures arrested last year in the run-up to the November 7 election.

She is the daughter of former president Violeta Barrios de Chamorro, who defeated Ortega at the polls in 1990, and of journalist Pedro Joaquin Chamorro, was shot dead in Managua in 1978 for opposing the Somoza dictatorship, which ruled Nicaragua for nearly half a century until the victory of Ortega's Sandinista National Liberation Front (FSLN) in 1979.

During Chamorro's seven-day, closed-door trial, the government alleged financial crimes were committed through the Violeta Barrios de Chamorro Foundation, a press freedom training and defence centre that Chamorro directed for 20 years and which has since been shuttered.

The state said the foundation was used to receive money from abroad to go towards destabilising the government of Ortega and his vice-president and wife Rosario Murillo.

READ MORE: Why presidential candidates were detained in Nicaragua 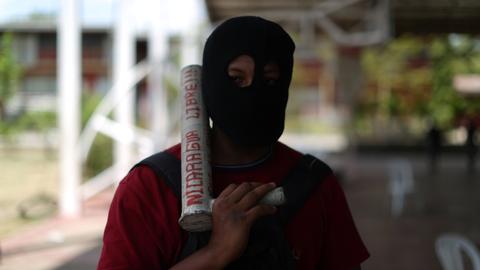