The record-breaking pace, more than 58 percent of the total 2016 turnout, reflects intense interest in the vote, in which incumbent Donald Trump, a Republican, is up against Democratic nominee Joe Biden, the former vice president.

More than 80 million Americans have already cast ballots in the US presidential election, according to a tally from the US Elections Project at the University of Florida, setting the stage for the highest participation rate in over a century.

The record-breaking pace, more than 58 percent of the total 2016 turnout, reflects intense interest in the vote, in which incumbent Donald Trump, a Republican, is up against Democratic nominee Joe Biden, the former vice president.

Huge numbers of people have voted by mail or at early in-person polling sites amid concerns the coronavirus could spread at busy Election Day voting places.

Trump trails Biden in national opinion polls as most voters say they disapprove of the Trump administration's handling of Covid-19, which has killed more than 227,000 people in the United States, with case numbers once again breaking daily records as Election Day nears on Tuesday.

Democrats hold a significant advantage in early voting due to their embrace of mail balloting, which Republicans have historically cast in large numbers but have shunned amid repeated and unfounded attacks by Trump, who says the system is prone to widespread fraud.

Experts have predicted turnout will easily surpass the 138 million who voted in the 2016 presidential election that Trump won. Only 47 million votes came before Election Day in 2016.

In 20 states that report party registration data, 18.2 million registered Democrats have already voted, compared with 11.5 million Republicans and 8.8 million with no party affiliation. The data does not show for whom the votes were cast.

Biden and Trump duel for Florida

Donald Trump and Joe Biden duelled over the crucial state of Florida on Thursday, painting radically different visions of the United States as big new GDP figures showed the economy getting back on track even as the Covid-19 pandemic accelerates again.

With Trump touting an early end to the health crisis, while warning of rampaging "socialists," and Biden slamming the president as irresponsible and vowing to heal America's "soul," voters face a dramatic choice in five days.

Trump, 74, held another big rally in Tampa, telling the cheering crowd that coronavirus lockdowns under Biden, 77, would banish normal life.

"They will allow you nothing," the Republican said.

"We're never going to lock down again.... We're open for business," he said, telling supporters that his own bout with Covid-19 this month proved that it can be beaten.

"You know, the bottom line is you get better," he said.

The coronavirus has already taken 228,000 American lives and is strongly rebounding nationwide in a long-predicted end-of-summer second wave.

But Trump, badly behind in the polls, is counting on economic recovery and fear-mongering about the Democrats turning the United States into a leftist failed state to outweigh Biden's message over health.

He got good news on that score on Thursday with new figures showing an annual rate of growth of 33.1 percent in the third quarter, a jaw-dropping statistic that reflected the fact that the economy is rebounding from such a low base.

But elect Biden, Trump told the Florida crowd, and they will face "rioters and flag burners and the left wing extremists."

In a bid to soften Trump's abrasive image, beloved by his base but a turn-off to swing voters, he was introduced at the rally by his wife Melania, a rare presence on the campaign trail.

"We are a country of hope, not a country of fear or weakness and we have a leader who shows us that every single day," said the first lady, 50, who immigrated to the United States from Slovenia as a young model.

READ MORE: US Presidential Election 2020: Why Trump wants to be the underdog

Biden, addressing a socially distanced drive-in event in Broward County, reminded supporters that of all the states there are few as important as Florida in deciding the outcome of tight elections.

"Right here in Florida, it's up to you. You hold the key. If Florida goes blue, it's over! It's over!" he said ahead of a second event in Tampa.

Rebuffing Trump's central charge, Biden emphasised his claim that he would bring responsible leadership after months of attempts by the White House to play down the virus' danger.

While Trump mocks him for holding small campaign events, Biden said he was showing an example, instead of staging the president's "super spreader events."

"We need a president who's going to bring us together, not pull us apart.... The heart and soul of this country is at stake."

Both candidates will be hopping from swing state to swing state in the last hours up to Tuesday. Trump will set the pace, with a frenetic schedule, but Biden's strikingly quiet campaign is also revving up.

After Florida, Trump was to fly to Fort Bragg in the toss-up state of North Carolina for a meeting with troops. A plan ned rally in Fayetteville was postponed until Monday due to the weather, the campaign said.

Trump defeated Hillary Clinton in Florida in 2016 but an NBC News/Marist poll released on Thursday had Biden with a 51-47 point lead in the state. A new Quinnipiac poll had Biden ahead 45-42 in Florida, with a close race in Iowa, but Biden maintaining slightly larger leads in Pennsylvania and Ohio.

In Florida, the Marist poll showed Biden had a commanding lead among Black voters (84-14), women (57-41) and independents (55-41) and was also favoured by seniors (53-46), who make up a large pro portion of the voters in the Sunshine State.

"Right now, Biden runs up the score among voters 65-plus and independents, groups Trump carried in 2016," said Lee Miringoff, who conducted the Marist poll.

READ MORE: Trump trails in virtually every poll, but can he beat the odds again? 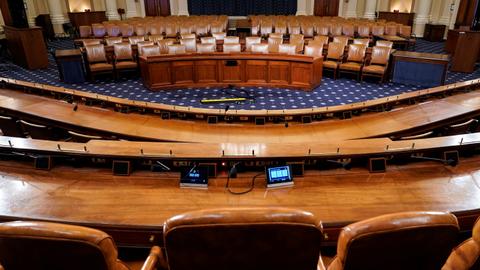 Trump impeachment hearings to going public for all to see 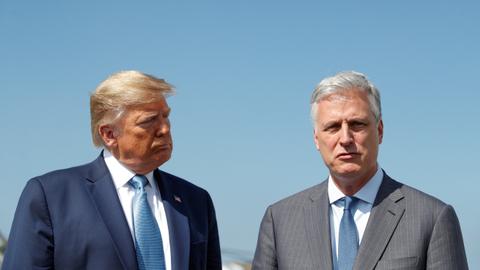