A district judge ruled that enforcing anti-BDS clauses violated freedom of speech, after a Muslim American speech pathologist was fired for refusing to sign a ‘No Boycott of Israel’ clause.

A judge in the US state of Texas has struck down a law, which allowed officials to ban the awarding of state contracts to people or entities that support boycotts against Israel.

The law had resulted in a Muslim-American, Bahia Amawi, losing her job as a speech pathologist over her refusal to sign a ‘No Boycott of Israel’ clause.

Her case was taken up by the Muslim civil liberties advocacy group, the Council on American-Islamic Relations (CAIR), which filed a suit against Texas Attorney General, Ken Paxton, on the grounds that the law violated Amawi’s constitutional right to free expression.

The court ruled that the Texas Anti-BDS Act suppresses unpopular ideas, and manipulates public debate on Israel and Palestine through coercion rather than persuasion.

H.B. 89, the Texas Anti-BDS Act, stuck down as facially #unconstitutional.

Thursday’s verdict means all similar clauses in state contracts are void and that Amawi will be allowed to resume her work at a local school.

The Boycott, Divestment, and Sanctions (BDS) movement is a grassroots campaign, which calls on individuals, businesses, and government to cease their economic and cultural ties with Israel until it stops its occupation of Palestinian land and oppression of Palestinian people.

Its success in the last decade has made countering it a foreign policy priority for Benjamin Netanyahu’s government.

In the US, Israel’s primary ally and financier, politicians from both major parties have sought to prohibit BDS despite clear legal warnings that doing so will be unconstitutional.

Legislatures in 25 US states have passed laws sanctioning those who take part in BDS by not allowing them to access government contracts. The measures can apply to state employees, such as law enforcement officers, teachers, and public health officials, among others.

BREAKING: A federal court in Texas just blocked the state's law suppressing boycotts of Israel, ruling that the law violates the First Amendment.

This is now the third federal court to block an anti-BDS law as unconstitutional. We won't stop defending the right to boycott.

In a 2018 Al Jazeera article, Palestine Legal attorney Radhika Sainath, said: "The Constitution is the highest law of the land here (in the US), which means it's the final word on the matter so what you're really seeing here is an attempt to take away the fundamental right of Americans to protest a policy that they feel violates human rights abuses by engaging in their right to boycott.”

For CAIR, the battle is just beginning, and the group has promised to take on other states that have passed similar laws.

“We’re gearing up for the fights in the other 26 states where anti-BDS laws have been passed and we are certain that we are on the right side of the constitution and history,” said CAIR National Executive Director Nihad Awad.

The group’s Senior Litigation Attorney,  Gadeir Abbas, said the win was a victory against attempts to suppress free speech in support of Palestinians.

“It’s a complete victory for all Texans, to engage in political speech without government censorship.”

The court again rejects anti-BDS laws, eviscerating the arguements of the state and making clear the right to boycott Israel is as American as can be. https://t.co/WrxE33cOVg 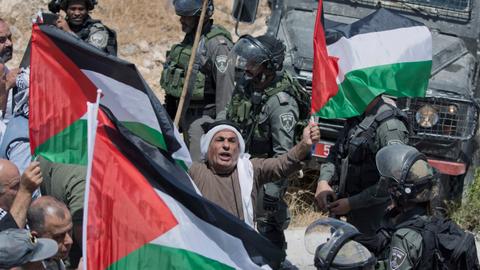 Are Palestinian activists in Canada safe to protest against Israel?