US President Donald Trump invites his Ukranian counterpart Volodymyr Zelenskiy to visit the White House amid an impeachment process triggered by a phone conversation between the two men.

President Donald Trump said on Saturday that he would like the Ukrainian President Volodymyr Zelenskiy to visit the White House, and expected the Ukrainian leader to take him up on such an invitation.

"I would certainly say I'd invite him," Trump told reporters outside the White House before departing for New York.

His open invitation to Zelenskiy came amid his ongoing impeachment process that was launched following a phone call he made with the Ukranian president.

What is Trump accused of?

Trumps termed the request as a “favour” and reminded the Ukrainian president that “the United States has been very, very good to Ukraine”.

Many critics interpreted the conversation as a threat to Ukraine to withhold hundreds of millions of dollars in military aid.

On September 18, news about the call emerged after an internal whistleblower complaint raised the issue and potential impropriety. Since then the scandal has cascaded and potentially threatening Donald Trump's presidency.

In the first formal test of support for the impeachment investigation, the Democratic-controlled House voted almost entirely along party lines––232 to 196––to move the probe forward in Congress.

The vote demonstrated unity among Democrats who accuse Trump of abusing his office and jeopardising national security for personal political gain. But they did not pick up a single Republican vote. 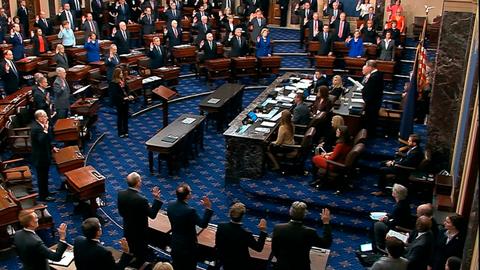