US President Donald Trump has announced by tweet that he had fired his defence secretary, Mark Esper, further destabilising a government already navigating Trump's refusal to concede election defeat to Democrat Joe Biden.

"Mark Esper has been terminated. I would like to thank him for his service," Trump said on Twitter, announcing his replacement by Christopher Miller, the current head of the National Counterterrorism Center.

The firing of Esper, who had clashed with Trump over his suggestion of using military personnel to quash civic unrest, comes a week after the US presidential election.

Trump, who is pursuing so far flimsy claims of election fraud in the courts, has only until January 20 before he has to leave the office and Biden takes over.

...Chris will do a GREAT job! Mark Esper has been terminated. I would like to thank him for his service.

Esper said in June he opposes the use of the Insurrection Act, which would have allowed Trump to use active-duty military forces for law enforcement duties in containing street protests.

Speaking to reporters at the Pentagon then, Esper said active-duty troops in a law enforcement role should be used in the United States "only in the most urgent and dire of situations."

"We are not in one of those situations now."

Esper, Trump's fourth Pentagon chief in four years, was fired after 16 months in the job trying to keep his head down politically as he pursued fundamental reforms to the massive Pentagon bureaucracy and sought to reshape the US defence posture worldwide to focus on the threat of China.

But Trump was angered when Esper resisted pressure to deploy federal troops to quash civil unrest, and also slow-walked Trump's desire for a rapid full withdrawal of US troops from Afghanistan while violence continues in the country.

READ MORE: Are the US protests widening the Trump-military divide?

Trump's move, expected by many insiders, was nevertheless a shock, coming just a week after losing his bid for reelection to Democrat Biden and just 10 weeks before he will depart the White House.

Miller spent 31 years in the army, deploying in Afghanistan in 2001 and Iraq in 2003 with the special forces.

After retiring, he became a consultant on clandestine operations and intelligence to the government.

In 2018-2019 he was a White House advisor on counterterrorism and transnational threats, and from 2019 was deputy assistant secretary of defense for special operations.

In August he was named director of the National Counterterrorism Center. 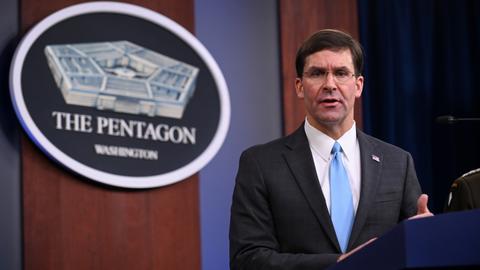 US troops leaving Syria to go to western Iraq – Esper