US downplays spat as Mexico snubs Summit of the Americas

Exclusion of Cuba, Venezuela and Nicaragua from Americas' summit prompts Mexico's president to skip the event to protest US "hegemony" and "lack of respect for nations."

What was meant to be a week-long showcase of cooperation beginning from Monday looks more likely to become a display of division that reflects diminishing clout over a region where long-time US economic and diplomatic influence faces a growing Chinese challenge.

Confirming it was not inviting Cuba, Nicaragua and Venezuela to the Summit of the Americas, a senior White House official cited "reservations regarding the lack of democratic space and the human rights situations."

In response, Mexican President Andres Manuel Lopez Obrador said he would stay away.

"You cannot have a Summit of the Americas if you do not have all the countries of the Americas attending," Lopez Obrador announced, complaining of US "hegemony" and "lack of respect for nations."

Although Foreign Minister Marcelo Ebrard will represent Mexico instead, the leftist populist leader's absence will diminish the impact of a summit where US-Mexico relations are at the heart of major immigration and trade issues.

The White House downplayed the spat, saying Biden was sticking up for principles, but that there was no bad blood between the neighbors.

"We do not believe that dictators should be invited," Press Secretary Karine Jean-Pierre told reporters.

However, she noted that Lopez Obrador was set to visit Washington in July and said Biden had not been blindsided. "He was aware" ahead of the Mexican president's announcement.

In Havana, the communist Cuban government issued a statement calling its exclusion "anti-democratic and arbitrary."

Biden, who flies to Los Angeles on Wednesday, will be announcing numerous "deliverables" at the summit, Jean-Pierre said.

The agenda on Wednesday will focus on regional economic and health issues, then climate change on Thursday.

Friday will be devoted to the surge of migration to the United States –– a major concern for US voters and an area where Republican opponents see Biden as vulnerable in upcoming midterm elections.

As the summit kicked off, another thousands-strong migrant caravan departed southern Mexico for the US border, with some chanting "Freedom!" and "We want visas!" as they started the 3,000-kilometre  journey.

The Biden administration also notes it has secured the presence of other key regional players, including Argentina's left-leaning Alberto Fernandez and Brazil's far-right Jair Bolsonaro.

Uruguay's President Luis Lacalle Pou was due to attend but cancelled after contracting Covid-19, he tweeted on Monday.

The Summit of the Americas is the first held by the United States since the inaugural 1994 meeting in Miami, where then-US president Bill Clinton sought the creation of a trade area to cover the whole continent except communist Cuba.

The United States has since soured on free trade, with Biden following the lead of his predecessor Donald Trump, who said such pacts hurt US workers.

Trump championed a hard line on Venezuela and Cuba and did not attend the last Summit of the Americas, in Peru in 2018. 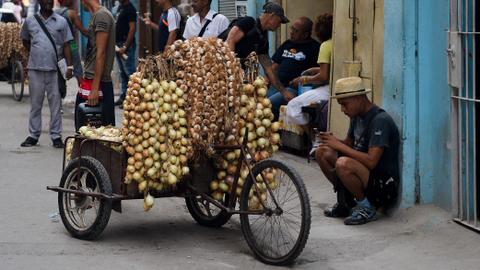 Trump cracks down on Cuba, Nicaragua and Venezuela